The fourth volume is a bit more focused thematically, including 5 stories of the Zothique circle, 3 of the Averoigne one and two Hyperborean ones. This doesn’t mean, of course, that there is any aspect of Clark Ashton’s writing that is not represented here. There are many good and great stories here, with quality peaks at the beginning and at the second half, and a stellar high at the Charnel God/Dark Eidolon combo.

The Dimension of Chance: In the far future of 1970s (the story was written in the ’30s) an American military plane ends up in a strange world after chasing a Japanese aircraft. There, random probability has a much more active role in shaping the world, resulting in creatures whose physiology is pluralistic to say the least.

Nice idea, whose materialization is, however, doomed from inception to be rather tiresome when injected into words. Of the weird science-fiction CAS genre, of which I am not a fan.

A Star-Change: Alien beings take the protagonist with them to their planet.

One of CAS’s exercises in descriptions of weird environments, imbued with the fatalistic conception of mankind’s limitations. Not much to keep.

The White Sybil: In Hyperborea, a poet catches glimpses of the White Sibyl, a divine oracle, follows her up a mountain, sees another world, yet when he touches the woman the mirage is shattered.

This has a poem-like quality, lots of description, and not much in the way of plot or action. It is definitely beautiful but rather tiresome.

The Isle of the Torturers: After his nation is wiped by pestilence, a king (who has immunity by wearing a magic ring) sails for a distant land. A storm throws his vessel on an island famed for its sadistic inhabitants.

Of the Zothique circle, yet not much in the way of plot. Obvious resemblance to the Masque of Red Death, (also, a very early manifestation of Melnibone?) quite predictable, it unfortunately doesn’t rise above mediocrity.

Though it could theoretically be slotted in the dungeon crawl genre, this is more descriptive and eloquent than needed. It has a nice escalation, but feels rather unpolished.

The Secret of the Cairn: An artist discovers a strange stone in the forest, which he cannot approach – when he does, it seems that it keeps distancing itself, without changing position. Afterwards it is revealed as part of an elaborate alien ritual -the aliens take the protagonist for a short visit to their world.

This had potential to be great, sylvan cairn and all, but the alien edge along with the overwhelming weirdness of the alien world description weighs it down a lot.

The Mandrakes: A sorcerer kills and buries his wife in the garden; in this spot start sprouting female-shaped mandrakes.

Part of the Averoigne cycle, a solid short story with grand overtones of rural witchcraft.

The Beast of Averoigne: The appearance of a comet heralds the coming of a strange beast in the vicinity of a monastery, a terror that hunts in the night. The aid of a sorcerer is finally enlisted to thwart the devil.

Part of the Averoigne cycle, a grand narration from three different points of view/characters, with a brooding twist in the end. Excellent medieval horror.

The Disinterment of Venus: An ancient Venus statue is unearthed in a monastery garden, inducing the monks to satyriasis.

Part of the Averoigne cycle. A nice, unusually sexually suggestive story which reeks of hidden monastic lust, an exultation of pagan carnality with a satisfying ending.

The Maze of the Enchanter: A man trying to locate his abducted fiancé enters a wizard’s territory, ending up in the sorcerer’s notorious labyrinth.

Top-notch CAS dark fantasy. The descriptions are evocative and rich like elder vitae. Just a bit more of plot action would take it to the grand category.

The third episode of Vathek: The completion of an unfinished Vathek appendice, in which twin brother and sister indulge in forbidden love and pacts with the Devil.

A majestic capture of Vathek’s atmosphere, this is overally excellent, though it could perhaps be edited to a lesser word count.

Genius Loci: A painter seems to be maliciously affected by a locale with a pond and some gnarled trees. His friend, trying to save him, calls the artist’s girlfriend, who however proves incapable of overpowering the locale’s influence.

The spirit of the place as a vampiric entity: this is the core idea of this beautiful little story. Not much to dislike here, apart from the slightly slow pace.

The Voyage of King Euvoran: The stuffed bird forming the crowning jewel of a king’s crown is revived by a necromancer and flies away. The King embarks on an expedition to retrieve it.

Part of the Zothique cycle, yet unusually humorous in tone, this has very memorable locales, an island ruled by birds, and a fitting fairy-tale-esque ending.

Vulthoom: Some humans who have been stranded on Mars descend to the planet’s interior and are offered a mission by a god-like entity – a task that involves preparing Earth for colonization.

A nice case of CAS-ian sci-fi, that focuses on plot rather than heavy descriptions.

The Flower-Women: The omnipotent wizard from the Maze of the Enchanter visits another planet out of boredom. There he meets plant sirens and reptilian sorcerers.

An almost light-hearted story that reveals an almost humane side of the stern enchanter. Very pleasurable. 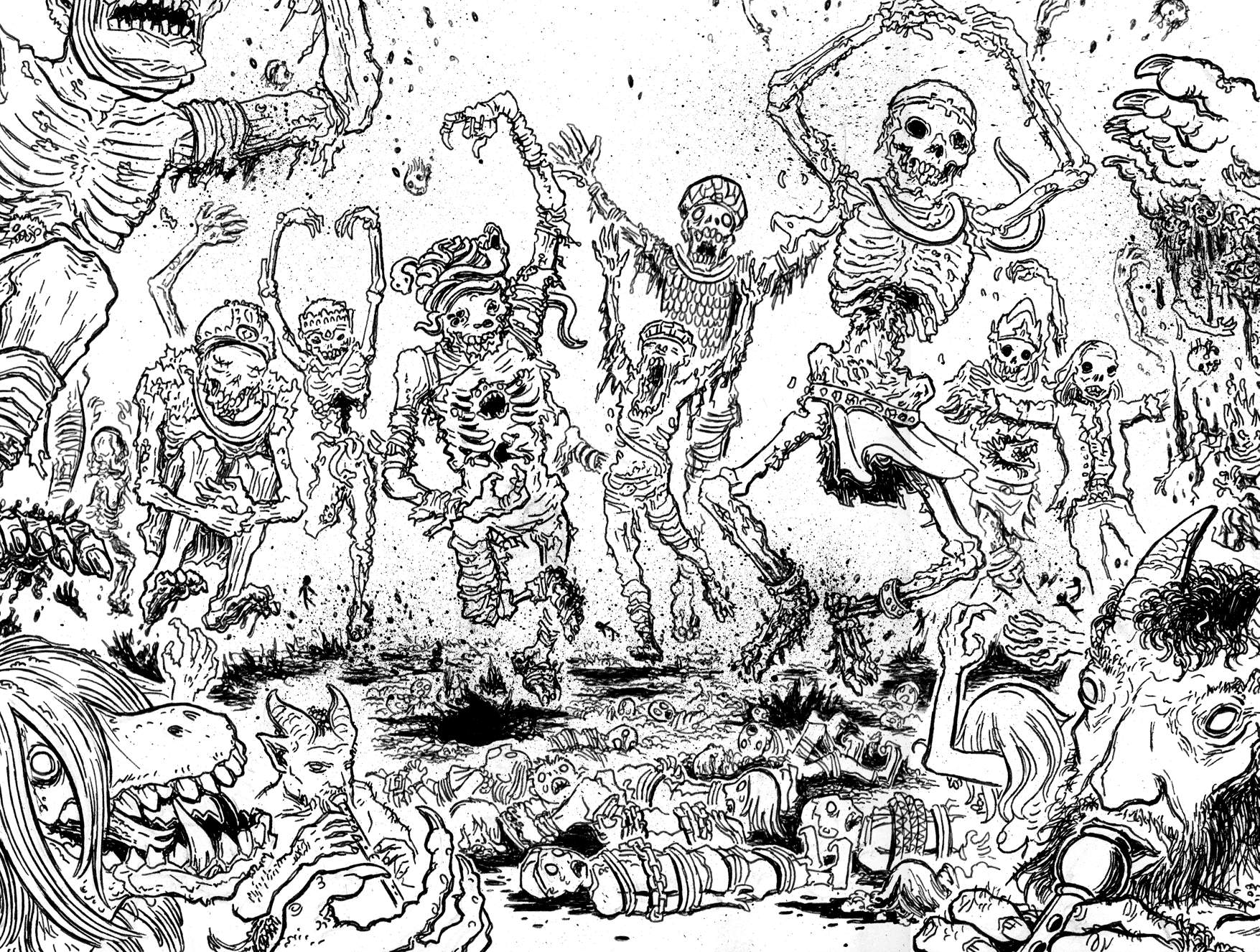 Scene from the Dark Eidolon, by Mockman

The Ice Demon: Three persons embark on a quest towards the oncoming glacier that heralds the coming Ice Age; they seek an ice chamber holding a frozen army, along with royal gemstones. The glacier seems to be imbued with malevolent consciousness and agency.

An ode to ice and cold. Set in the later days of Hyperborea, the story contains amazing descriptions of arctic vistas and ice-sculpted monuments. The demon itself and its signs of attack are a study in majestic subtlety. Strangely reminiscent of Algernon Blackwood’s The Sacrifice, as far as atmosphere goes.

The Charnel God: A city dominated by the temple of a death god – all people who die in its walls end up in there. The protagonist must rescue his wife, who has the symptoms of death, but remains alive.

Part of the Zothique cycle, it showcases pulpy dark adventuring done right. Not of the sword & sorcery kind where heroes indulge in their skill, but of the one that reads like a good dark fairy-tale.

The Dark Eidolon: A mighty wizard returns to the city of his birth to wreak revenge upon the prince that once scorned him. With him, he has the dark eidolon of a demon god.

Part of the Zothique cycle, and one of CAS’s most grandiose creations. Has there been a more majestic description of oncoming doom than the one of the beings coming upon the city? This is the stuff apocalypse is made of.

The Weaver in the Vault: Three imperial guards go to a necropolis to fetch an ages-old mummy to their liege.

Part of the Zothique cycle. When CAS focuses on dungeon crawling he excels. With nice background hues of steppe-like camaraderie, and amazing, atmospheric descriptions of the charnel grounds.

Previous: Found in a forest clearing
Next: The Village of Sirtol
Share on Facebook
Industries of Inferno, 2022    About    RSS