Despite the larger number of stories and pages in comparison to volume two, the third tome of Clark Ashton Smith’s Omnibus, was overall better, containing no pages that forced skipping. On the contrary, the good stories are many, and the great are among the author’s most exquisite writings.

A rare sequel, this story builds on the success of its predecessor, and tries to elaborate on the Flame’s hazy nature. The cosmic and psychedelic elements are increased, the atmosphere becomes more ominous and tenebrous, even apocalyptic (somewhat reminiscent of Dunsany’s gods), but the truth is that the weirdness, a crucial part of the original’s magic, is here reduced. Solid, though somewhat tiring in alien descriptions.

The Eternal World: A man finds himself in a place beyond space and time, where he, along with three other omnipotent beings, is abducted by a mysterious spaceship.

An interesting idea, yet the implementation is tiring, as tends to be the norm with CAS’s hard space science fiction

The Demon of the Flower: An empire ruled by plants, with a demonic flower as a divine emperor. A man travels to find a way to banish the tyrant.

This one is a mix of fairy tale and weird fiction, an intriguing combination that unfortunately proves less than stellar in this one, most probably due to the weirdness immensely overpowering the flow.

The Invisible City: Two explorers wander through Gobi desert and reach a city with invisible buildings and denizens.

A stellar idea which however was is less than stellar in its execution. Things are rather forced and sped up, especially in the latter half.

The Immortals of Mercury: A man is captured by the immortal people residing in Mercury’s interior, and is to be used as an ingredient for a metal alloy.

A typically protracted sci-fi story which however has a nice Underdark (deep cave) feeling. Still, more a train of gonzo and action scenes than a proper story. The idea of heat-resistant giant lizards used as grills was amazing.

The Holiness of Azedarac: Part of the Averoigne circle, this centers around the pious monk Ambrose, his quest of exposing Azedarac’s satanic faith, and his sudden disappearance.

Not an astounding plot, yet here Clark Ashton’s pen indulges in a wealth of verbal delights. Good sylvan atmosphere and a pinch of archaic druidic mysteries. Also, the end is unusually kind and optimistic, pushing aside the cold hand of duty that is many times unmoving in such fairy-tale-like legends.

The Maker of Gargoyles: Also part of the Averoigne circle, this concerns two malevolent gargoyles, imbued with their creator’s spiteful instincts and desires.

An essentially magical way of thinking, the transference of and animation with powerful emotion to creations. The story is not unpredictable, but it nicely zooms in the setting, town and particular period, offering also a wealth of lore.

Seedling of Mars: An empty martian spaceship kidnaps (somewhat) a number of humans and takes them to Mars, who is revealed to be an almost animated planet. What follows is a battle between open-mindness and exploration lust on the one side, and conservative human nature on the other.

Finally, a very good science fiction story. This is part philosophical, part action, vibrating with the wonder of novelty.

A Vintage from Atlantis: A pirate crew finds an ancient jar in a beach, containing a wine from Atlantis. Once drunk, the wine bestows visions of the now-sunken continent.

Magnificent prose, jewel-encrusted words that flow like amber wine through the pages. An oneiric atmosphere.

The Weird of Avoosl Wuthoqquan: A miserly moneylender pawns a couple of huge emeralds which start rolling from his reach. He chases them through city and forest to a cave, where doom awaits.

A quirky story with a weird idea (gems rolling on their own), completely on the side of fairy-tales. Almost great.

The Seed from the Sepulcher: Two Amazonian explorers looking for rare plants. One of them becomes infected by a parasitic plant.

Grotesque, with a fear of hybrids and impurity in its core. A bit verbose, it could benefit from a tighter editing.

The Second Interment: The protagonist is deathly afraid of premature burial, having already been buried alive once. The story follows his mental and bodily sensations as he sinks in the despair of the inevitable second coming of his dreadful situation.

A Poe-like thematic story which traces the manic, panicked and feverish thoughts of a phobic man that dreads the grave.

Ubbo-Sathla: An artifact found in a pawnshop is revealed to be a divination implement, able to bridge eternities. Using it, the protagonist’s consciousness is slowly merged with that of an ancient sorcerer, and then a primordial god.

A nice story of sorcerous might and hubris, it kind of fails to rise to stellar levels.

The Plutonian drag: An extraterrestrial drag causes anyone imbibing it to perceive near future and past visually, flattening time into perspectiveless space.

The core idea of this is ingenuous and very well presented. Alas, it could be expanded a bit more; right now it is just a rough uncut gem.

The Supernumerary Corpse: A man poisons his nemesis but ends up with two identical (and far removed in spatial terms) corpses.

This has a very short and weird plot, which remains essentially unexplained. Very nice. 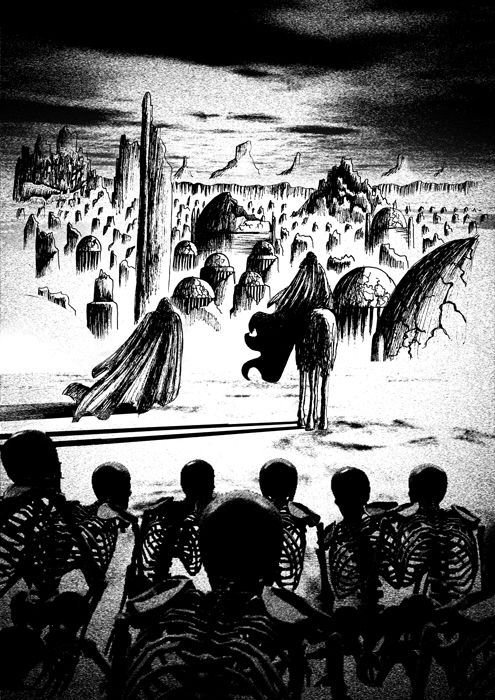 *Empire of the Necromancers *

The Vaults of Yoh-Vombis: A team of settlers from Earth ventures into the ruins of a forgotten race on Mars.

The Nameless Offspring: Someone finds himself in the vicinity of his childhood neighborhood. He ends up in the manor of an old acquaintance, who hides a secret offspring.

A gothic manor story which has everything: the decrepit owner, the dead spouse, crypts, the deformed spawn, the butler. This is the stuff CAS lived and died for, who in this particular case throws in both Necronomicon verses and ghoulish delights.

The Empire of the Necromancers: Two necromancers leave a region populated by the living, in order to establish an empire, in a province long decimated by plague; their empire is populated by undead animated by their spells.

This is how the archaic undead rises through the pen of a true master. This is how terrible majesty and arcane wonder is evoked. One of the best CAS stories.

The Double Shadow: A sorcerer’s apprentice watches his master’s approaching doom as a conjured unfathomable being slowly approaches his shadow.

Clark Ashton Smith at his best. Sorcerous evocation, a weird and utterly unexplainable horror from the dark past.

The Colossus of Ylourgne: The dead start leaving their graves and converge in a ruined castle where a sorcerer plans his revenge upon the world.

Magnificence incarnate in the Averoigne circle. A long story with highly atmospheric parts, a solid plot and parts that could well have influenced such a masterpiece as «In the Hills, the Cities.» Reified awe.

Previous: Clark Ashton Smith Collected Fantasies, vol 2 – The Door to Saturn
Next: Found in a forest clearing
Share on Facebook
Industries of Inferno, 2022    About    RSS