It is said that the man who makes the crossing of river Volga by himself during early spring, will be granted a hearing with his bocknovoi. That is, if he survives the fords of the Great River. For it is at this time that the snows of lower Caucasus melt, and the streams and the rivers rage with the power of the spiteful winter departure. The flower seeds still bide their time inside the soil, wise in their hesitation. But the Vindiy, the local Alan witches, cross the bald meadows, in search of ingredients: mandrake roots from the execution sites, nichtervii from the wake of Veles’ steps, kaskevin from the nests of water nymphs. It is a strange time of the year for simple folk who wander without purpose or company.

Still, every year, two or three youths from every village try to reach the roaring River Father and make the crossing. Most turn back at the sight of the foaming river beard, suitable for a God in its grandeur. Some never reach Volga, falling prey to the evil sorcerers, the Fardiva, who hunt people for their hair, nails, and shameful desires. Some meet the tiny godlings, the invisible Moderai, who are drawn to the campfires and taunt the youths with riddles and ghostly silhouettes. Of those that find the courage to try the crossing, only one for each three or four villages survive. They return to their village by another path, with eyes older than before, with as great a strength as that of a blacksmith, with the gift of the animal tongue, and with their bocknovoi’s words of wisdom.

Attelov is the son of Mirva, one of the village women who still hold true to the mountain art of skin sculpture. His father is Jilmifor, a former merchant from the Danube delta river, who was enchanted by the essence of the Great Mountains, and abandoned his trade to live and marry among the Alan people. It is to him that Attelov owes his slightly darker skin hue, in comparison to the alabaster colours of the other Alans.

Today is the celebration of the Celestial Spike, and all village men above the age of 14 are locked in the temple, performing the rituals of the Searing Lance. The skin sculpturers are working the Grand Loom with all the other village women above 14, on the ritual of the Knitting Waters. The children are told to roam the surrounding woods, under the supervision of four adults – the four that saw in their sleep last night the White Wolf and listened to its Logos. 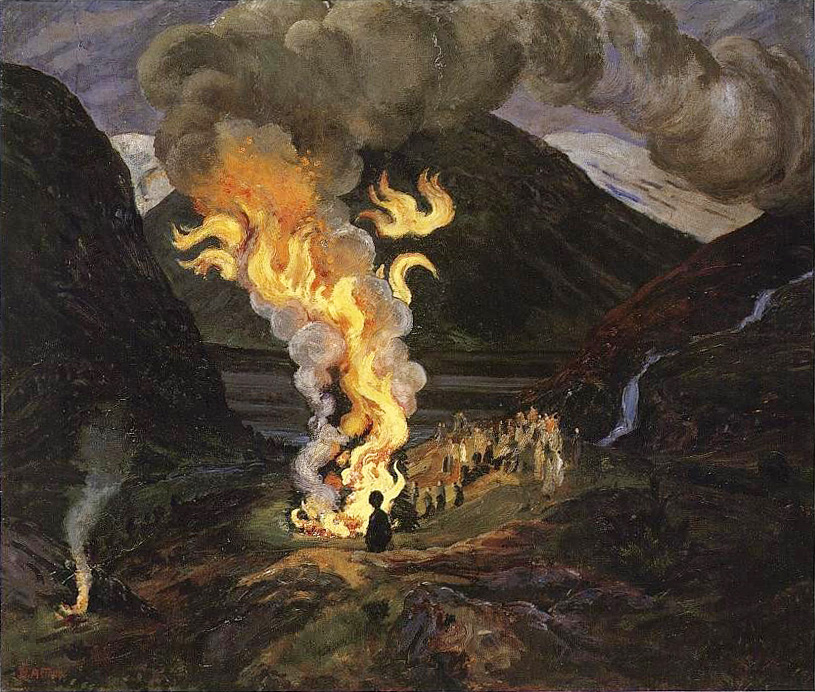 Attelov is 11, and is currently combing the forest floor for late winter berries, spathalo (a soft wood with taste like smoked goat cheese), and the tails of the Earth Serpents. His eyesight is lesser than this of the pure Alanoi children, but his intuition is more than making up for it. His belly now full, his breath pulsing with sweet smoked aroma, Attelov focuses now on the search for Serpent tails.

The Earth Serpents are the village’s soil spirits, dwelling deep beneath the surface, honeycombing the earth for jewels, and thus making the ground more fertile. It is true that the hamlet’s little fields are yielding exquisite quantities of crop, thrice a year, and have been the cause of more than a few skirmishes between the villagers and other Alan tribes. The Serpents are usually too deep underground to be perceived, but all the old peoples’ tales agree: it is in the forest -especially where mushroom patches grow thick- that a silent-moving child could spot the shiny tail of an Earth Serpent who has come to rest and feed on the underground fungi.

Attelov has long been searching for a glimpse of a tail, fruitlessly, but his childish persistence is huge. Today, along with his friend Maerpil, he was sure that a tail would yield to their eyesight.

-I tell you Maerpil, I dreamt of the Cross Eagle and it told me to have my eyes upon the closed earth. Today is the day that we will catch it. We will make jewels for both of us out of its skin, and the village elders will kneel before us, and we will be offered the Honey of the Stars!

His eyes were gleaming with an almost feverish hue, as all children’s’ are. It is the hue of the healthy being, the one that was once in the eyes of all people, in ages past, before the knowledge of Self and Death came upon Man. It is the hue of the intrepid instinct and the will of the explorer.

-But you have dreamt of the Cross Eagle twice this month Attelov, and of the Crooked Snake, and of the Gnarled Oak of Veles. We search every day but the only thing that we find is our mouths full of spathalo. Let’s go to Volga instead, added she with a mischievous gleam in her eye, like Polaris seen through the roof cracks. We will cross it and we will look to our bocknovoi, and he will tell us how to catch an Earth Serpent. Plus, we will be the youngest ones that will have make the crossing.

-Don’t be absurd, said Attelov absent-mindedly. You know that girls do not have bocknovoi. You have the Niparoi. But hush now, look there, under this yew, beside the thyme patch. Look, there are mushrooms today. We will wait for the serpents here.

Attelov was fully absorbed in his examination, and did not wait for an answer. Neither was he given one. Maerpil was not anywhere near when he saw the forest bed leaves moving and the gnarled tail rise slowly, inquisitively, out of the ground. She was not near when Attelov approached it with catlike grace.

One step did he take and the cloud above the forest darkened with premonition – but he noticed it not.

A second step and the village wells’ water foamed for a moment – but he tasted it not.

A final step and the Great Loom rattled in spite of the women’s careful attendance – but Attelov never heard it.

He grasped quickly the tail – too quickly to realise that no tail was it, but a crooked finger, an appendix of a gnarled hand which had been caressing the cavities of earth and the blood clots of the gods for far too long. 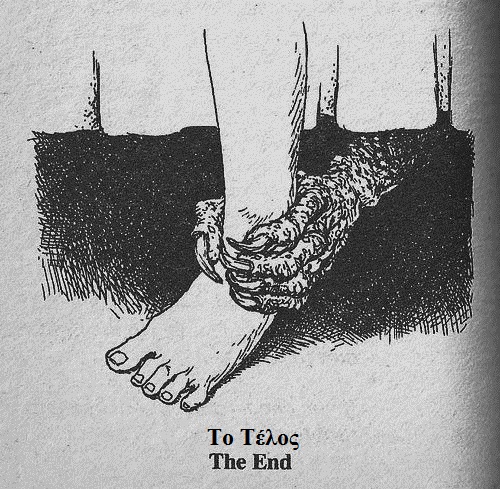