The Death of Balder

Three shapes are gliding through the night, under the tower’s shadow marching. Subtle to the eye of the beholder, three shadows, like pilgrims of a forgotten darkness deity. Three women, standing still for a moment, drawing down the moon, off of its watchtower, that silver pulpit on the starlit sky. One of them shrouds it in a black sheet, the second one sews it inside with silver thread, the last one sprinkles it with golden mead, laying it in a dreamless sleep. Thence they plead the one eyed stars, with the power that is theirs from the dawn of time, to avert their gaze from the world for this night of all nights.

No light will taint this hour’s purity, uttered the first shape.

On they proceeded, through the arched entrance. Unbarred had it been left, all latches had been cast away, though there was no lock in the whole world which could keep them at bay. Towards the queen’s chamber they crawled, betwixt the sleeping servants. The oaken door opened willingly under their eye. The palace lady had fallen into an exhausted slumber, following her long labour. They moved past her, past the treating plate which for them had been prepared, past the hearth erstwhile cold. They circled the newborn’s cradle.

The first light that will shine on him will be nothing less than the sun’s first ray, recited Skuld. On its brilliance he will shine, most radiant of all, the sun will be his chariot.

His first sip is the tear of the sleeping moon, muttered Verdandi lowering on her gnarled finger a drop to the half opened lips of the blond infant. With its knowledge he becomes wisest of all, one eyed and hanged like his father, but whole nevertheless. The runes are under his will.

His death was decided afore his birth, pronounced Urd unbinding a knot. The humblest of creation will be the herald, the deceitful Fire will be the wielder, all of creation but one shall mourn him.

His name is Balder, they uttered all three as one, and were gone as Frigg arose and the sun touched for the first time the newborn god.

The shadow chased him again. The shadow with the voice of crackling wood. He run through Odin’s frozen court, gloomy in its desolation. Though fast his feet did carry him, the shadow always approached. A postern appeared before him, where none existed before. Dimly carved on the door was a wolf – chained; a snake – coiled around the world. The middle part was dominated by the first treachery of the gods.

He pressed mightily upon the splendid wood, and it succumbed to him. Beside it Yggdrassil was revealed, the tree uprooted, Wrathfully smoldered. The runes lay broken among the roots, Enviously destroyed. The Sun and Moon vanished, Gluttonously devoured. The earth’s gold, blackened and defiled, Greedily rendered useless. Compassion and Mercy dead, Arrogantly lacerated. The crops rotten, Slothfully abandoned. The sacred ordinance of hospitality devoid of meaning, Lustfully raped.

A glare burned his eyes, and blinded was Balder. Moments before becoming lost in nothingness, he faintly smelled of mistletoe. Alas, the memory did not accompany his waking self.

He was safe at last. His mother, queen of the gods, agitated by his dream more than he ever was, had walked upon the whole of creation, claiming vows from every being, plant and animal, ore and mineral, from every force of nature, that none of them will ever come to harm the youngest and the wisest of immortals. The divine hodgepodge was entertaining itself, trying with every weapon imaginable to wound Balder. Laughing was he as swords inflected, arrows broke upon his body. Thor, though mighty Mjollnir was he wielding, was unable of even coming into contact with the most beloved of the gods. Gungnir, the unwavering spear of Odin, faltered, inches before his son’s heart, weary of its fruitless exertion to break the oath. The oath that steel had sworn to the one eyed god’s wife. Balder burst with joy and calmness. The Sun, his chariot, was powerfully shining. 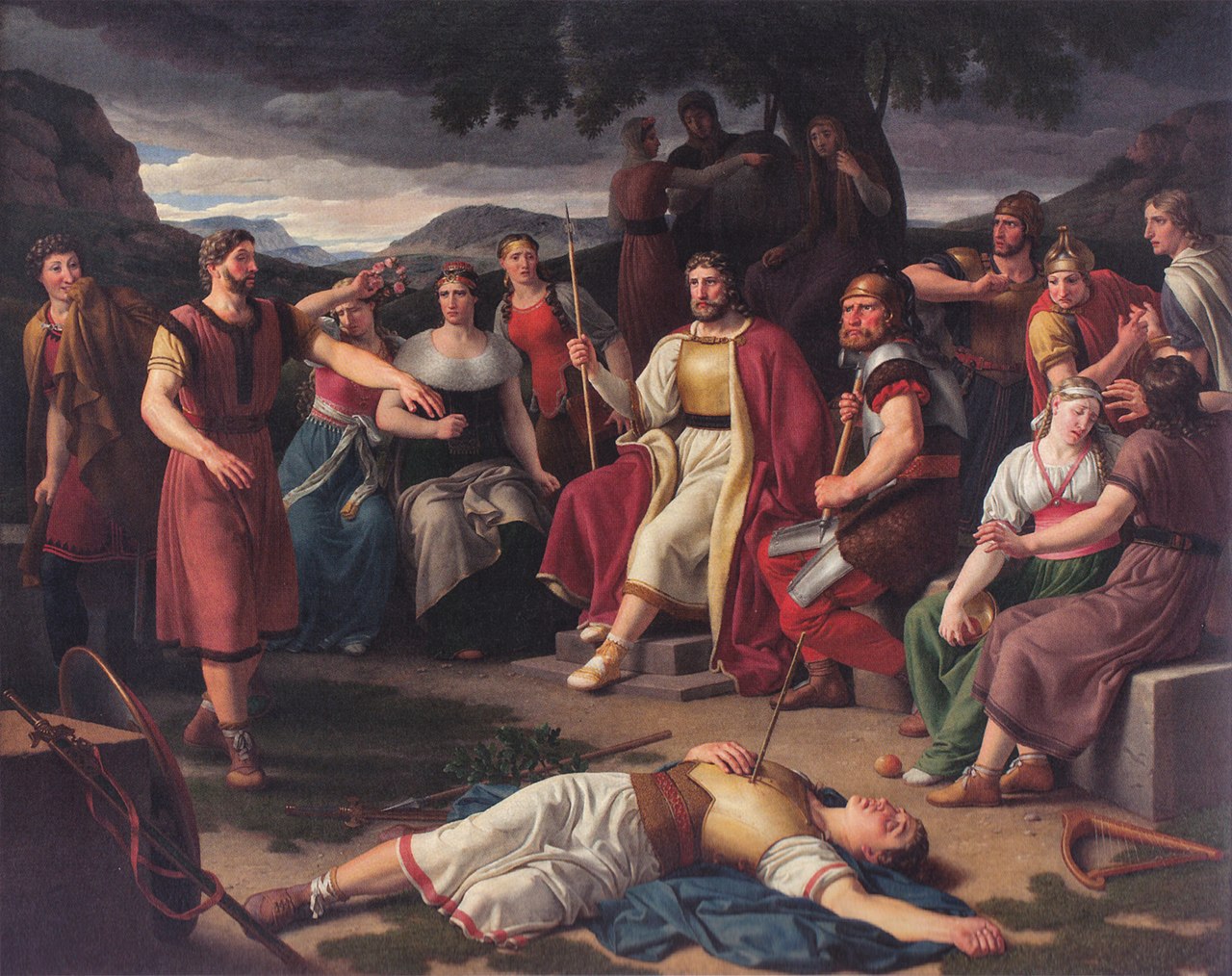 A flickering of thought, not even a reminder
Up to the surface was it trying to rise
Alas! Fate’s net was tightly strapped around him
‘Cause what is woven in the Norns’ loom can’t be changed
Nor by mortal, nor by beast, neither by gods almighty
And thus did Loki from Frigg learn with deceit
That all the beings of the world, all elements more so
With vows terrible had she leashed upon her brow
So as no harm to come to him who was spawned of her loins
All pieces of creation did vow, besides the humble mistletoe
So unseeming to a goddess tall, beneath her notice was it,
That she considered harmless, small enough,
To not embrace with promise given
Behold! Loki in his guise of truth,
The fiery mantle shining, slithering,
Commands a gimlet branch of this forgotten herb
And full of cunning does he strike to bore
A fatal hole through Odin’s son, so helpless.
At once is lifted Fate’s veil
And galloping returns the smell to Balder’s mind
Of this discarded plant, his woe, his doom.
Late is the hour for him now,
Useless his wisdom, his excellence
To Destiny’s iron will he must succumb,
Admit that even gods are upon it chained.

Thus died Balder, youngest, wisest and fairest, the most beloved in Asgard whole. He passed away due to Loki’s wrathful envy, due to his mother’s haughtiness. And thus ascended the decline of Aesir, they passed from glory’s summer to their destiny’s autumn. Swift-footed was their twilight, approaching, burning darkly.

The wolf Fenrir shatters the chain that holds him in check, the chain for which did Tyr consider justified to sacrifice his own hand. The Wolf is unleashed, rattling the world with his steps. He mates with a hag, a giantess, and with the rabid brood of this union he marches against the gods from the West. His mouth ajar, dripping blood, the upper jaw touches the sky, the lower scratches the earth.

Garm, the guardian of Hel’s gates, emits a manic howling from the bowels of the earth, a signal to the unglorified dead to follow him to battle.

The giant Hrym, chief among the unburied souls, sails with the Ship of Night from the East, a ravenous shield his banner. His guide and navigator is the Great Serpent of Midgard, eternal enemy of the world.

Surt, lord of the distant South, unsheathes his sword of Flame. Leading the armies of the giants north, burning his way through. At the sound of his steps rocks crumble, fields are salted, mortals drop to dust, leaving behind shades as silent witnesses.

From the north weighs anchor Lord Loki, the Great Traitor and Lord of Lies, on his ship made of nails of the dead. So terrible its visage, that the sea splits in fear before it, the earth opens up in terror underneath it, the skies are ripped apart in horror of its flagitious being.

And the gods did do battle, and the giants, and the honoured dead led by the Valkyries in their last fight. And the plain of Vigridr did flood with ichor and black blood, but also with heroics and incomparable abnegation, the stuff that the grandest tales are born of. And the dead were beyond count, so numerous that Hel’s halls, unable to host them all, did shatter, letting the sun’s blessing on them for the first time. But they were lost, along with their mistress. And lost too was Thor, though manage did he to slay his nemesis, the Great Serpent of Midgard. And lost was Odin, first to fall beneath Fenrir’s jaws. And lost was Loki, broken under Heimdall’s blows.

Thus ended the time of Gods and the old world. In blood, fire and death.

The death of Balder[Daudi Baldrs] is one of the crucial events of Norse mythology, the one that starts the chain reaction of Ragnarok[Twilight of the Gods]. Balder, son of Odin and Frigg, wisest and most beloved among the gods, associated with light and the Sun, begins seeing prophetic dreams about his death. His mother becomes worried as son as he relates them to her, and embarks on a journey through the world, in order to claim vows from every being, object and natural force, that nothing will harm her son. But she ignores the humble mistletoe. In order to celebrate her success, a gathering of the gods is called, where all of them try to wound the Sun god, using different weapons, to no avail. Loki, god of fire and mischief, brooding a deep hatred for the Aesir pantheon, disguises himself as an old crone, and speaking with Frigg he learns that no vow was claimed from mistletoe. Assuming his true form, he gives a branch of it to the weaponless blind god Hod, so that he could participate in the festivities. Thus, unwittingly, Hod kills Balder. The gods in their despair realise that Loki participated in the murder and they incarcerate him. He escapes and departs far away, to prepare for the war against them. From this moment on begins the decline of the gods, culminating in the final battle at Vigridr plain, which marks the end of their era and world.