A hamlet that lies at the furthest edge of civilization, somewhere in Estonia, living in a mythical age. History intrudes in the guise of an uncanny German baron and his moon-stricken daughter (German aristocracy was the norm for a large period of time in the area) who visit their manor in the village. A local boy falls in love with the baroness; he becomes obsessed and visits her room at night, watching her sleepwalk on the roof. A local girl who has been in love with the boy for some time, tries to win his heart.

November’s main plot is a fairy-tale-esque love triangle (poor/local girl loves poor/local boy who loves rich/outsider girl). But where the film truly shines is in the way the village society is painted with weird uncanny folkloric strokes upon a black and white minimal canvas full of hauntingly beautiful forest landscapes, never taking itself too seriously.

The film starts with the abduction of a cow by a being that consists of three leg-like protrusions radiating from a cattle skull. As is shortly revealed, this is a kratt: an artificial being, a constructed helper, made of farm and domestic utensils (thus implementing a bit of sympathetic magic), and given life by a crossroads contract. Whoever wants to build a kratt must go to the crossroads, whistle and call the devil, and sign with three drops of her/his blood (the last part could be improvised; the cleverest of the villagers trick him with the juice of currants). Then the kratt is built and is animated. Akin to a witch’s familiar it is gifted with speech and can be given tasks to accomplish. In fact, its whole existence revolves around working: it loudly demands to be kept busy with tasks, otherwise it will attack the owner (this somewhat reminded me of the current digital era’s overflow of information which leads to a constant need for stimuli, jumping from one thing to the next). Even its demise is centered around work – if given an impossible task (like building a ladder out of bread) it ignites and explodes, its pieces sometimes visible as meteors in the night sky. 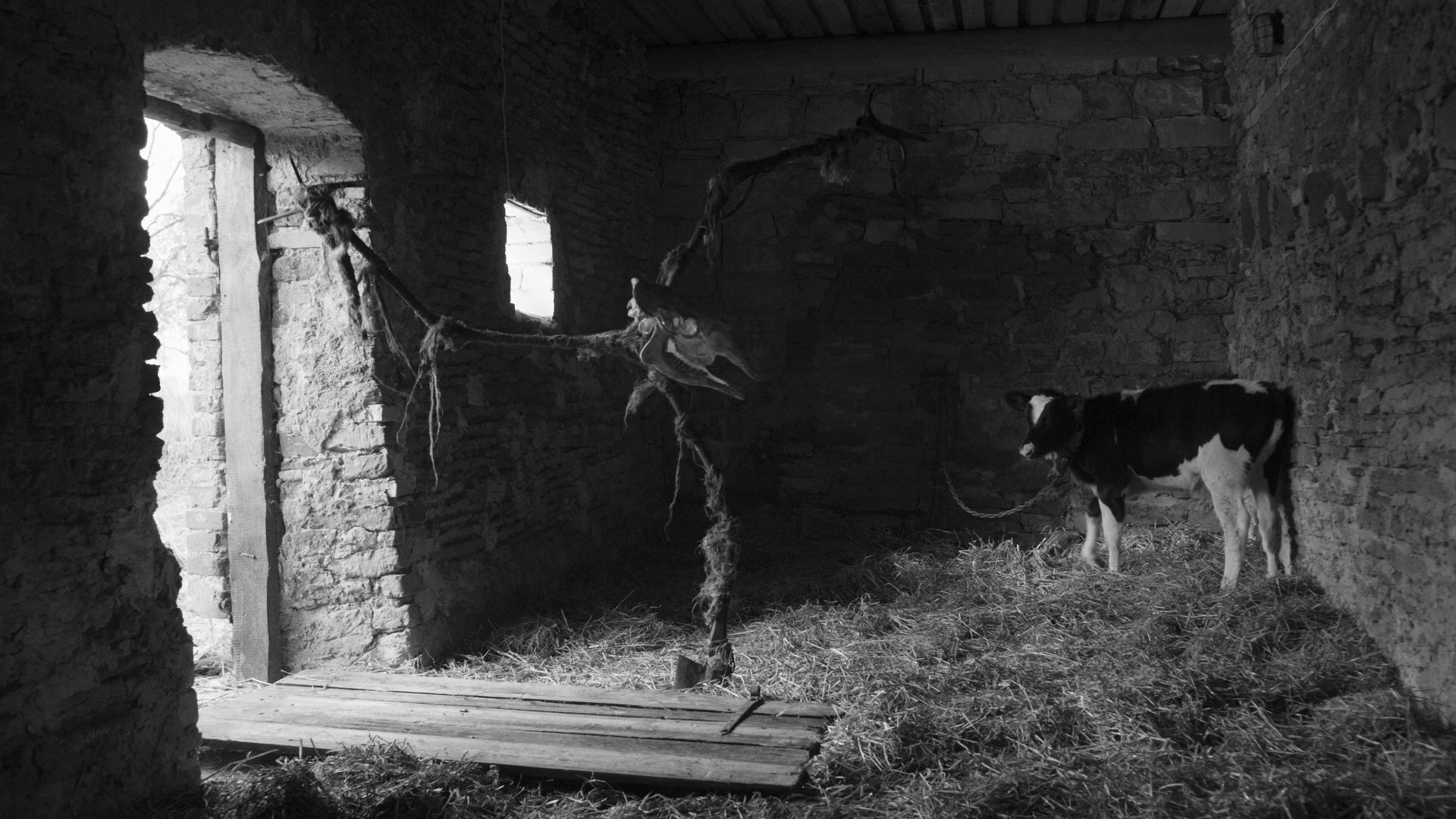 In Estonia kratt is a word used for Artificial Intelligence, for obvious reasons – a human creation capable of thought with an aura of menacing rebellion lurking beneath the surface. Moreover, an existence entirely devoted to and identifies with function is reminiscent of the quintessential worker-beings: software programs – which only actively exist when they perform the task they are made for. Still, in the latter part of the film a kratt is made of snow (a material not associated with work), and it seems to inherit the innumerable experiences of water itself – it speaks of distant lands to an ecstatic boy, while never performing any menial task. One can only dream of software whose bytes retain the memories and experiences of their past uses.

In this small settlement the dead return each year on All Souls’ Day. They come as a procession from the sylvan graveyard, dressed in white, their faces pale, solemn but not dangerous. They enter the saunas that have already been prepared for them, transforming to man-sized hens (a scene of Lynchean undertones). Returning to their human form, they have lunch with their living relatives (in the land of the dead they eat only tree bark) and talk about their lives. At some point they silently depart. 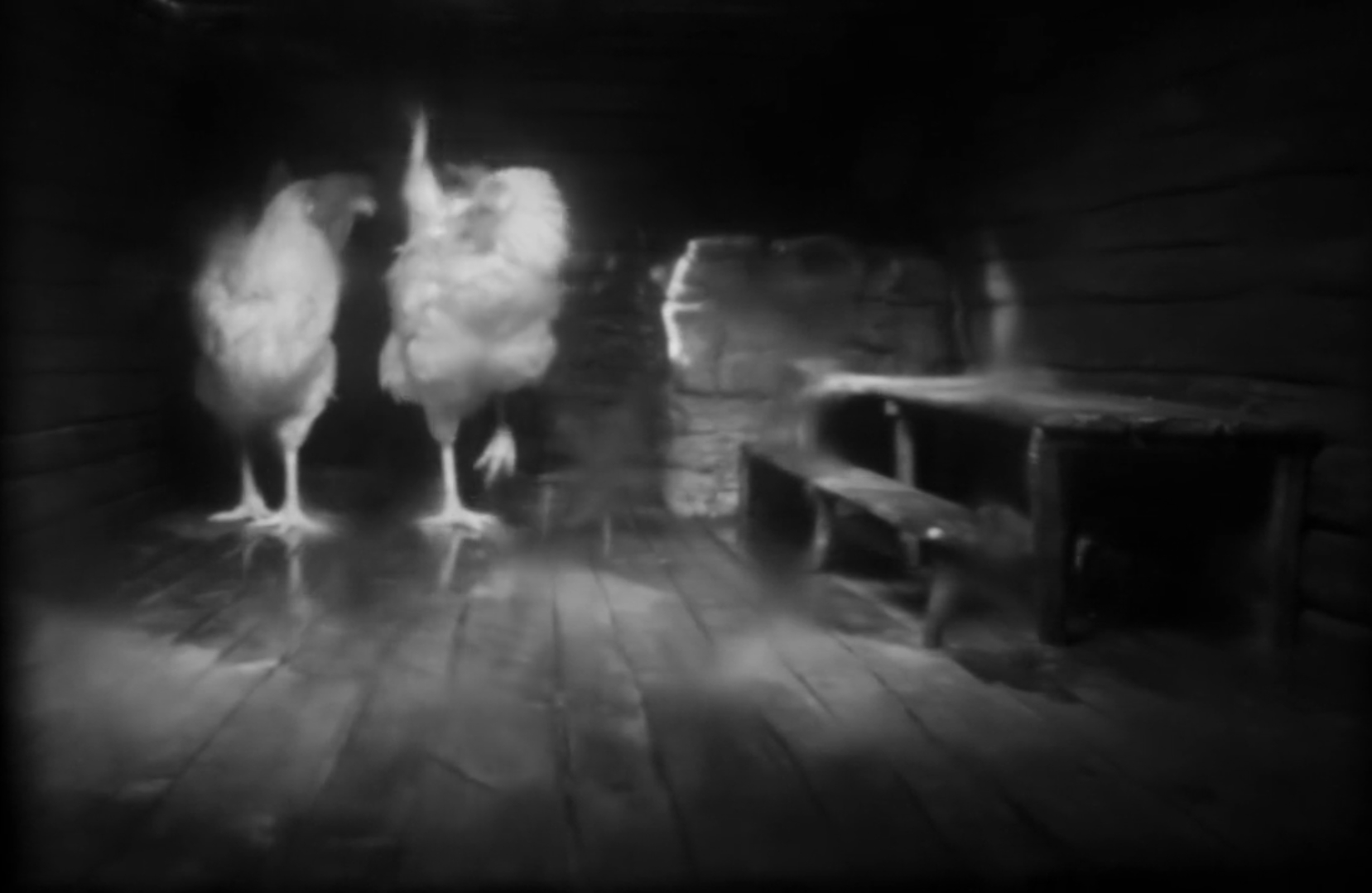 The wealthiest among them check on the family treasures hidden beneath the floorboards, next to the hearth fire. This was also the place where dead were occasionally buried in the far past1 – beneath the house hearth, in the underworld of the house axis mundi. With this blending of domestic and family foundations a genealogical continuity was seemingly achieved, and ancestors were granted the status of domestic deities; thus did the house truly earned the family denominator, lived and died in for centuries.

What is captivating with November is the way folklore and magic are embedded in the village’s daily life, not only in narration and rumour but clearly, before our very eyes. Instead of listening to the characters talking about their beliefs and customs or watching them performing rituals as detached anthropologists, we see what they see – a magical world. The film does not focus on the more-than-human as something extraordinary but casually embraces it in the same way it does with the other happenings in the village, always retaining a subtle hilarity. The female protagonist’s ambiguous wolf metamorphosis is presented in the same way as the stealing of a dress from the baroness. This is a vision of a pagan community that seems to discard our notions of real and imaginary. 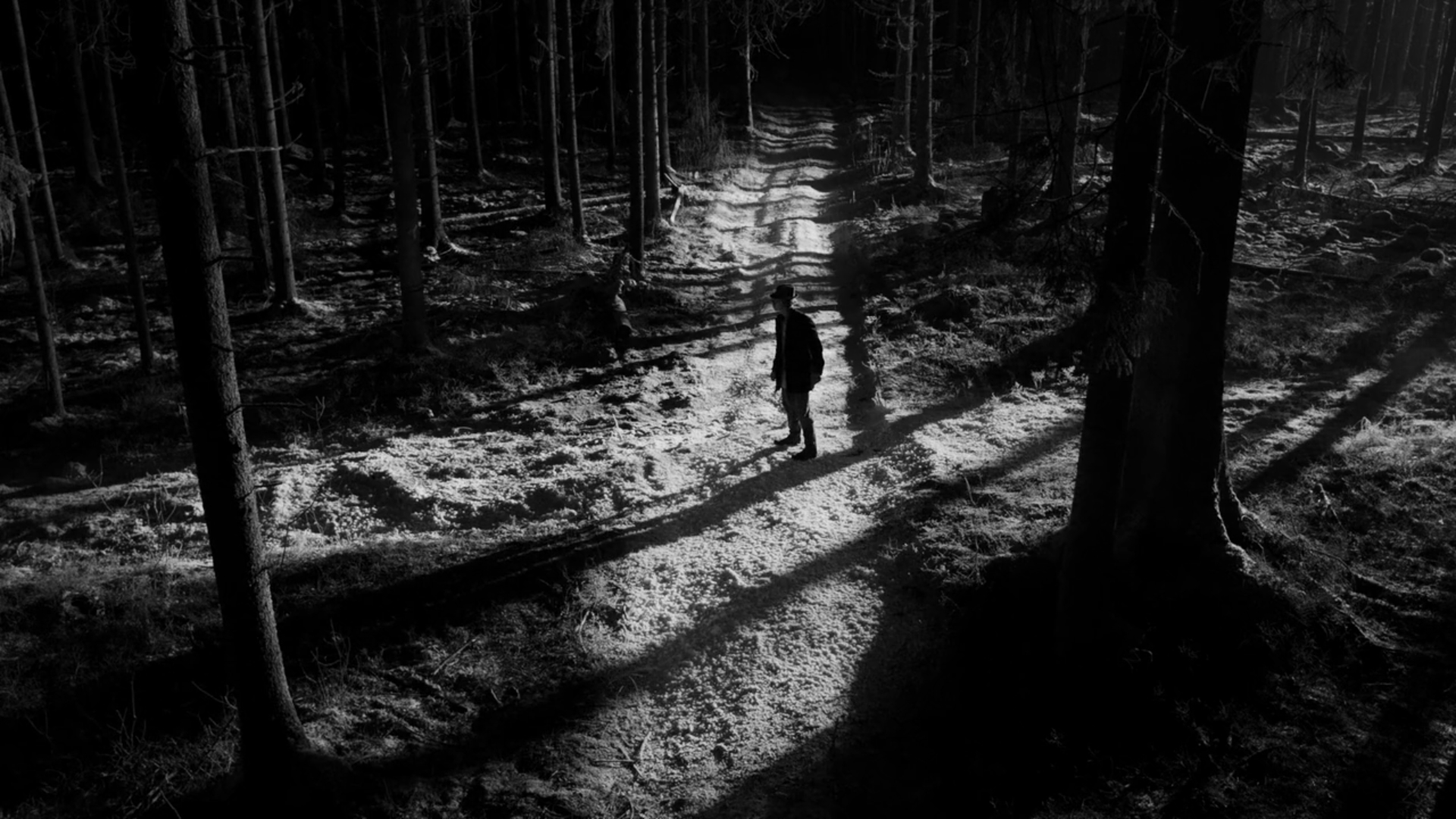 Christianity is not absent from the village; there is a church where the villagers go for Mass and seems to be the state religion. But the villagers’ (not the priest’s and the nobles’) Christianity is intertwined with the old faith and is of a very folk, practical hue. Church-goers take the communion wafers but do not swallow them; they hold them in their mouths, and once outside the church they remove and gather them, to use them as projectiles for hunting – for they are blessed. Of additional interest is the fact that Christian faith seems to offer no protection against magic – the priest’s mind is lost as a witch grinds some hair of his in her millstone.

At one point two villagers, talking about the visiting young German baroness, say that the land of Estonia is wrongfully claimed by outsiders. Because of this injustice they say that they themselves [as Estonians] have full claim on the land and everything that is upon it, outsiders included. It is here implied that in their land you can either be a native or a feature of the land. Nativity bestows an ontological difference to human beings: natives are active agents, subjects with rights of ownership; intruders, irrelevant to their power and wealth, are assimilated by the land as features, which are to be reaped as objects by those truly worthy of the land – the native-born. A logic along the lines of “as we have claim upon the fruits of the earth, we also have claim to the outsider baroness, for she intruded upon our land, thus reducing herself to something attached to the earth.” 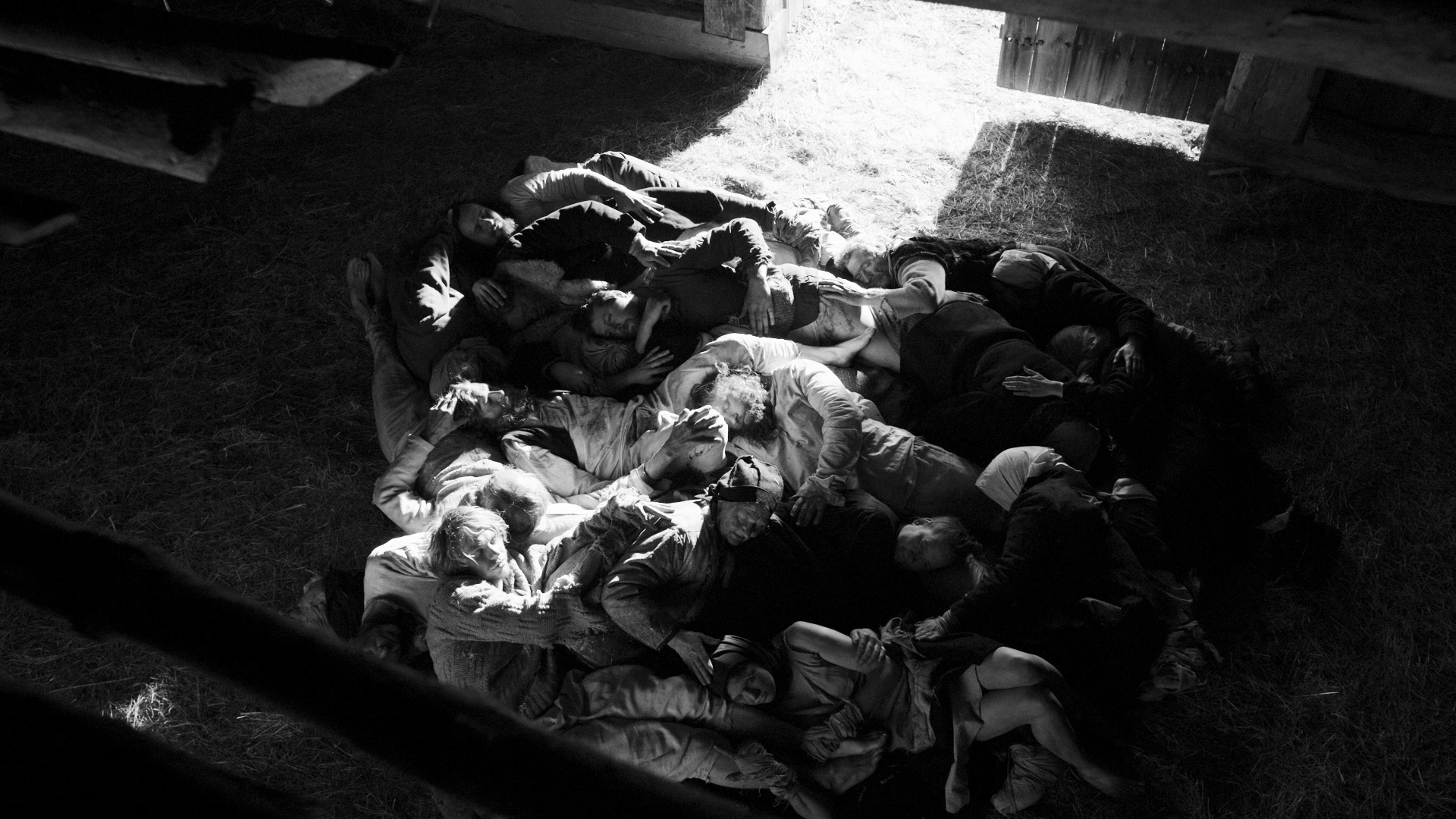 The plague as an outsider is a special case, for it seems to belong to the mythical side of the world. It is physically unable to enter the village and must resort to trickery: in the guise of a woman it convinces a villager to help it cross the stream and that is how it arrives in the area. Once inside, it is powerful and must be dealt with in a manner similar to the devil: by trickery.

Both the plague and the German nobles intrude upon the village. But their intrusions are of a qualitative difference (the former mythical, the latter historical) and that is seen in the way they are depicted. The plague, despite its theriomorphic guises, can be reasoned with; and it seems to unite the village on a deeper level – see the bodily patchwork after the negotiations with it. But the baron and his daughter are depicted as living enigmas that end up wounding the village body. Myth is kin to the village in a way that history can not be – and thus history ends up being irrational to the eyes of its subjects.

Previous: Herald of the Hidden, Mark Valentine (Tartarus Press, 2013)
Next: Lord of the Rings – Ένατη ανάγνωση, Μέρος πρώτο – Fellowship of the Ring
Share on Facebook
Industries of Inferno, 2022    About    RSS