The closed door of a room during night-time is, for that room’s inhabitant, a sign of security and isolation at the same time. Many a child has been torn before the dilemma of an opened or closed bedroom door. And perhaps it is not so rare the person that covers the keyhole opening, either with the corresponding key, a cloth, or even stuffs it with plain paper, so as to avoid the possibility of an unwanted gaze penetrating it and falling upon him during the small hours of the night.

The bedroom doors, as well as most of the interior ones in contemporary houses, are the ones still retaining the kind of keyhole with an aperture large enough for an eye to look through, or to be used as passageway for a thin object. This is the keyhole of interest for this text, the one that could be said to contain two functions:

–peering through (which in the more sophisticated doors of nowadays has been transferred – taking into account the impregnable to the eye secure lock – to the spy-hole/peep-hole (or the electronic camera even)),

–securing the door (which function has remained with the lock even in doors with more modern locking mechanisms).

Of all the interior spaces guarded by locks of the aforementioned kind that is of interest to us, I mostly focus upon the bedroom in this text, since sleep and keyholes seem to have a highly peculiar relationship.

In the case where the door is closed and/or locked but the keyhole is empty, it (the keyhole) provides a sensory connection between the outside and the inside. It is a window. But whereas the house window is usually an opening directed almost exclusively from inside to outside1, it seems that some of us mostly experience this particular window in reverse. We know the space outside the door; it is the space of our house. We do not need to look upon what lies outside the room, or rather we should not have to look – the space should correspond to what we have in our mind. The only being having a reason to look through is a stranger gazing into the room from the outside, trying to know what lies on the inside.

The keyhole is the most vulnerable part of a closed door, its thinner part, the one most easily violated. It is also its only immaterial part; it is a passage, whereas all other parts of the door are barriers or tools with a solid nature. It is a crack in an otherwise solid object, in this object’s continuous and sometimes seamless surface (the space beneath the door is also a vulnerable spot, but it is outside the bounds of the door per se). But while being the door’s weakest point from a physical point of view, the keyhole is at the same time its more essential one, as far as control over it is concerned, for it is through the keyhole that the door can be more safely secured. It is also the only part which connects the two spaces, inside and outside, which are otherwise separated by the existence of the closed door. 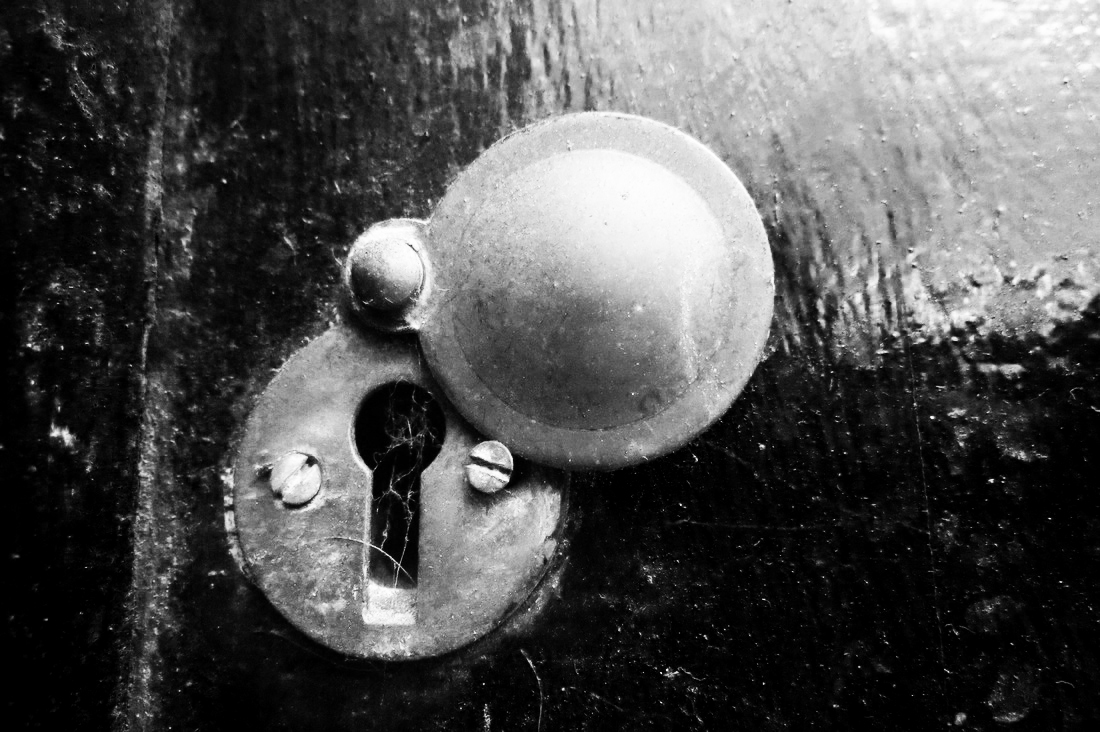 If someone is outside the door, hidden, waiting, and we are gazing through the keyhole, that person can easily surprise us if it suddenly brings its eye to look through the other side of the hole. It is a fear of the suddenness of this surprise (along of course with the possibility of the confirmation of the existence of a stranger) which can create anxiety to the one being on the inside. And it is not only the gaze that can come through the hole, but any imagined kind of murder weapon or even a voice, which can even be disembodied, without a perceptible in the observer’s field of vision body. One may well stuff the keyhole with a suitable material, but then, there is always the possibility of an entity on the outside pushing it back, resulting in (from the insider’s point of view) the apparent self-motion of an inanimate object, hence uncanniness.

It is also one of the two parts with which one can interact with the door (the other being the door handle). But, while the door handle interacts directly with the user’s body, the keyhole does so indirectly, through the use of the key. It is thus the only part of the door adding a third component to the system consisting of the door and the person behind it, namely the object responsible for its existence: the key.

Because of the opening’s smallness, gazing through the keyhole has a sense of the forbidden. Such small, narrow fields of vision are outside the normal, everyday experience, more reminiscent of static optic organs than anything else. They imply difficulty and constraints, restrictions in one’s visual appropriation of space, thus limits in one’s power, leading to the creation of a certain degree of helplessness. But the fact that those small and rigid fields of vision are outside the everyday experience makes them exotic, mysterious, something to be tasted with guilty pleasure. The fact that only our eye could be perceptible from the door’s other end (and this only if one focuses one’s gaze upon the lock) creates a sense of privacy, of isolation, perhaps of undetectability. The interplay between these two, somehow conflicting senses (namely that of restriction and helplessness, and that of impregnable isolation and untraceability) could be considered as the root for much of the beholder’s (on either side of the door) state of feelings and/or mind.