A couple of months ago the 3toadstools blog posted a challenge: choose a monster manual book, pick 10 monsters out of it (1 for each category mentioned in the original post), and then create a mini-setting using these monsters, giving each of them a twist. Well, a bit late to the party, but here is my own.

The setting is an underground world of endless depth; there seems to be no surface world. Moving south the climate gets colder, moving down it gets wetter. Rigid social and political structures are almost non-existent – only the Jermlaine organize their society in such a way.

On to the monsters, selected from the AD&D 2nd Edition Core Monster Manual:

Giant/Ogre/Troll: The Spriggan Gnomes live in the wide expanses of the arid central caverns of the world, where the three last flames of Xasmo-Luur burn eternally. These creatures are normally giant-sized (20ft tall), but they are able to become small (3ft) or tiny (1ft) at will. Their mode of reproduction has nothing to do with intercourse as we know it: all new spriggans are found in crypts inside the earth, usually by members of their own race that dig for this exact (reproductive, one could say) purpose. It is unknown how the new spriggans come to be there in the first place – most believe that they are created by crypt things (see below), while some claim that the earth itself gives birth to them. They are adults when found – there are no young spriggans. They are great crafters and artists by need – they gain sustenance through crafting, not by eating food.

Undead: The body of a new spriggan is always connected to a Crypt Thing via an extremely cold leather chain. The undead guards it ferociously and has to be somehow disposed of, in order for the new member of the race to awake. The crypt things constantly whisper to the «unborn» spriggans they are connected with. They are gnarled, thin, and each has in its possession a small non-magical artifact of remarkable craftsmanship.

Semi-intelligent humanoid: Sometimes rats find the crypts of the unborn spriggans, manage to stay beneath the Crypt Things’ notice, and start gnawing on the leather chains connecting the undead to the unborn, tearing them apart. From these leftovers, Jermlaine are formed – leather humanoid figures that prowl the underground in small well-ordered bands, looking for gems and the way to the surface, where they hope that they can find an ordered world. Their orderly, structured way of behaving is the closest thing to a lawful, ordered social organization in the world.

Ancient fey race: The Atomie Sprites dwell in the seemingly endless taiga caverns of the south parts of the world. They grow deadly mushrooms which they consider to be their priests, translators of the divine. The divinities in question are the numberless trees of their habitat. Through communion with their mushroom priests the fey try to discern the gods’ words, directions that are supposed to lead to the long-lost stars. The atomies are the only race ancient enough to remember the sky.

Great wyrm or lizard: The Behirs of the southernmost tundra-like caverns are twelve-legged reptilian scholars that wander upon and dwell within the walls of their vast caves. Their knowledge is vast and they may accept to trade a piece of information for a body piece of the inquirer; alternatively, they will accept a body part coming from the Living Wall (see below). The paths that are carved upon the walls by their indolent movement are rumored to hold untold secrets for anyone able to see them in their totality – alas, completely lighting one of their vast caves in order for the paths to become simultaneously visible, is beyond the power of any mortal flame, natural or otherwise.

Aerial creature: In their journeys through the western labyrinthine corridors of the world, people have glimpsed strange mists of deeply dark orange colour. They are Crimson Deaths, vaguely humanoid (though extremely elongated), gaseous creatures, the only animated remnant of the lost city of Xasmo-Luur. Even centuries after the ancient settlement’s disappearance, its burning sewers remain infamous; in them, for countless years, undying flames devoured hecatombs of sacrificial victims. The Crimson Deaths are the smoky remains of said sacrifices, the only thing that escaped the sewer grates. They will attack anyone holding or lighting a fire. Thus travelers are advised to avoid all flames within this area. 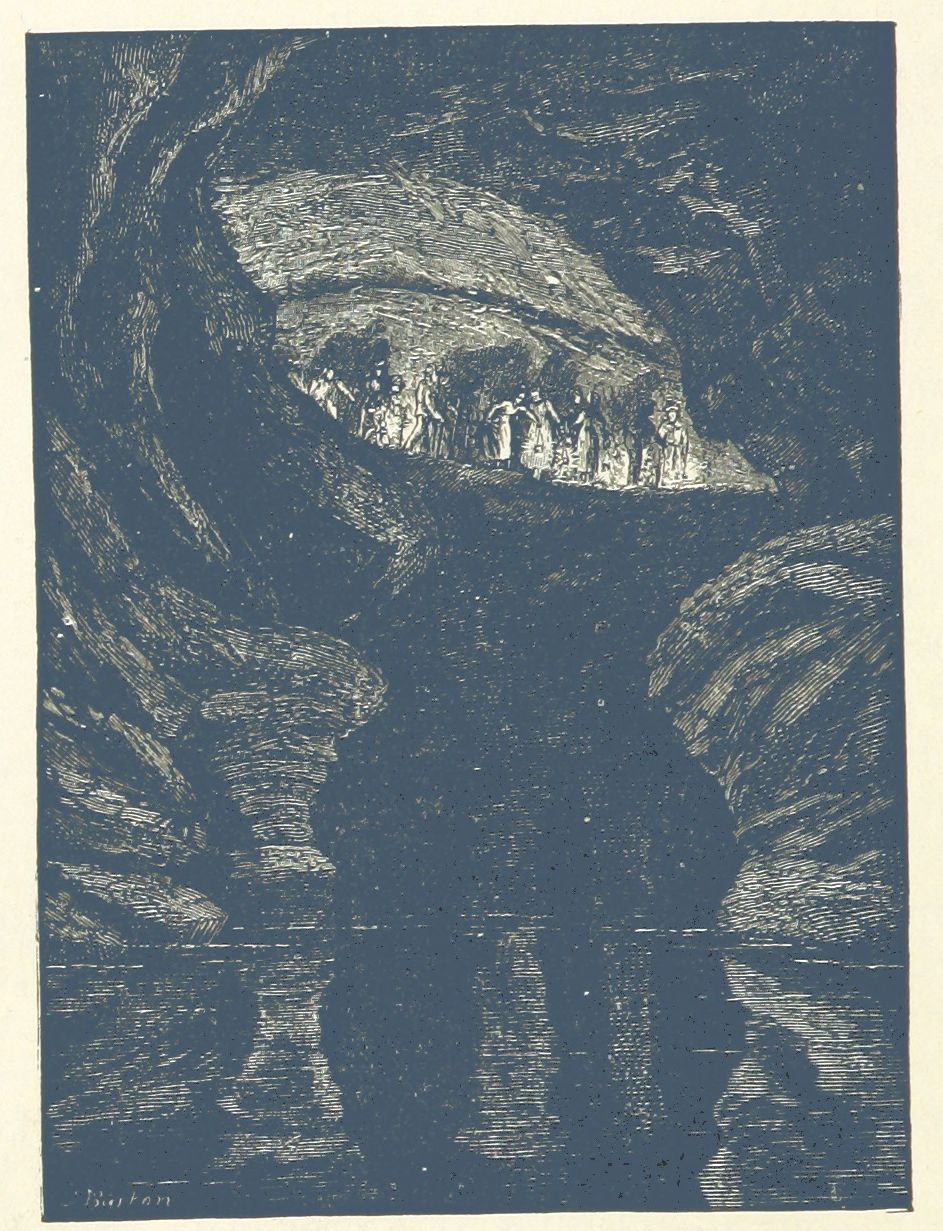 Something to lurk in the water: All waters of the world are connected, from the smallest stream to the huge sunless sea of Albixuatot to the contents of any water flask. When someone immerses her ear in any body of water, she can hear the faint splashing of the Dragon Turtle crawling and she can feel the creature’s ravenous hunger. The turtle is never far from any accidental fall in water. Whenever a boot steps in a seemingly innocent puddle of water only to find it surprisingly deep, when a thirsty wanderer kneels to drink from a lightless river, the huge turtle may pull the unlucky person into depths apparently impossible yet fatally real.

Something from another dimension: Commerce is scarce in the underground world, not only due to the difficulties of subterranean travel. The Arcane, towering creatures from another world, are the bane of merchants. Any transaction that involves profit has a chance of attracting the attention of these blue humanoids, which have been stuck for half a millennium on this world. They blame their plight on the mercantile ways of their past. They will approach any merchant they can detect and will force an unbreakable contract upon her with their telepathic powers: to find a way for them to escape this world, or die trying.

A classic creature from mythology: There is a seemingly endless network of stone staircases spanning much of the world: they cross the spriggan caverns, the ruins of Xasmo-Luur, the shores of the viscous Albixuatot Sea, and many other sunless places. The omnipresent handrails of these stairs have a scaly surface that sometimes writhes under the touch of whoever holds it. The rails are the countless necks of an enormous Lernaean Hydra. They may branch at seemingly random moments, creating new paths (and even locations as some fathom). There are those that say that the necks try to lead wanderers to the mouth they connect to; other claim that there are only necks; most agree that the hydra loves the taste of Atomies.

Some foul crawly thing that infests the underworld: All underground people have legends about the Living Wall that is sometimes encountered in the darkest of passages (always in total darkness) – a mosaic that is firstly sensed by touch: a bit of flesh where rock should be, a tooth, some bones, a writhing tongue. Then faint twinkling lights appear upon a frothing surface, usually the last thing someone sees as an individual being. The Wall seems to have existed for millennia, crawling, spreading throughout the bowels of the earth, incorporating (in the truest sense of the world) a legion of beings and things and cities (for the great city Xasmo-Luur now lives in the wall’s folds). It’s said that in some of its most ancient surfaces, far beneath the waters of the Albixuatot sea, the moon and the sun and the clouds can be seen. Some believe that if one passes through the living wall one reaches the surface world.

Previous: The Village of Sirtol
Next: Annihilation (Jeff VanderMeer, 2014)
Share on Facebook
Industries of Inferno, 2022    About    RSS