Categories and Forms of Meta-thinking in cRPG’s

Meta-thinking, however subtle it may be, can be traced to several parts (in varying degrees of intensity) of a cRPG, some of which are mentioned and discussed below. This is definitely not an exhausting list of “all things meta-thinking,” but rather a quick glance upon the subject.

The options menu, especially the game preferences one, is occasionally a source of meta-thinking pollution. In it the Player, as a divine entity, can sometimes choose the difficulty level of the challenges presented to him. In fact, even from the keyboard configuration one’s experience can be “polluted” by meta-thinking viruses; the existence of a key for jump or crawl can make the player change his mental image of the game, even before he starts it, sculpting it according to other similar games with which he has past experience. If for instance there is no key assigned to jumping, one may well deduce that the game is more on the tactical side of the spectrum rather than the action one, having in his mind associated jumping with more action-oriented RPGs. 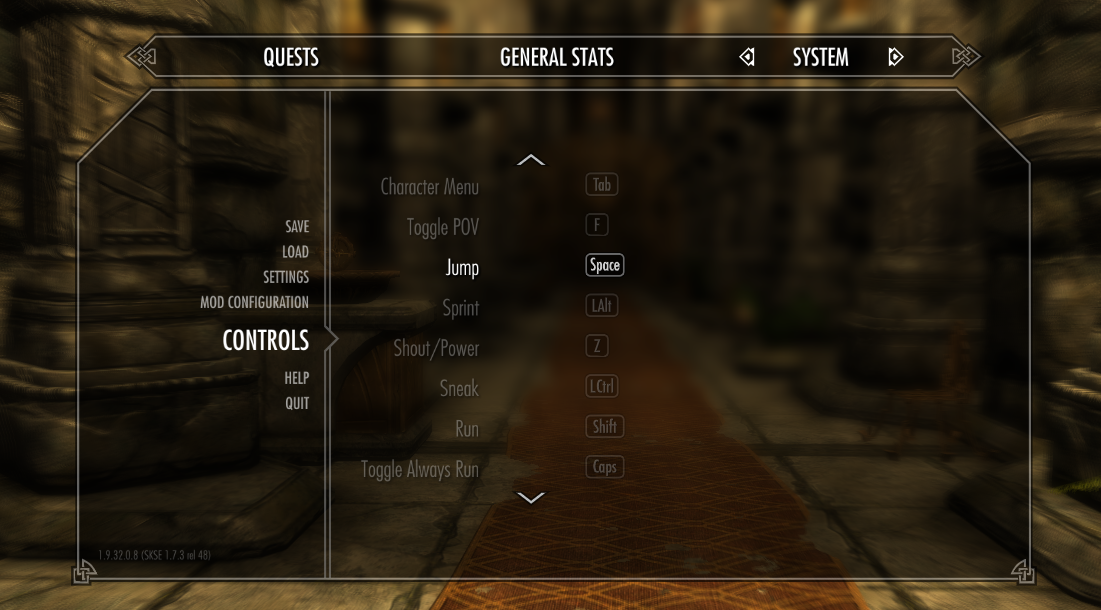 Since the arrival of platforms such as Steam, achievements have been a large part of the gaming experience (though they were certainly in existence before), and one more lens through which we see games and through which our experience of the game is shaped. The description of them – for some of them visible to the player before their objective is achieved – provides knowledge about the game, which otherwise would not be accessible. Reading, for example, that one must kill a certain amount of creatures to gain a certain achievement bestows a sort of quest that comes from outside of the game world, and creates a need in the player’s mind which may influence one’s in-game actions (one may adopt a more violent attitude towards the game world and its denizens for instance). Also, the Player is informed of the existence of a number of creatures of that type in the game-world, at least equal to the achievement’s one. Another example: if there is a yet unachieved achievement that says “discover 70 locations of interest,” one’s attitude towards game space is different from when no concrete number is present, leading to continuous scrutiny of the environment, backtracking, a holistic approach to the game regions, in which these locations may be, etc. One final example: Legend of Grimrock 2 has an achievement that reads: “Kill a monster with a single blow.” This may push the Player towards min-maxing, in order to maximize the damage output, or it can lead him to backtrack later on to starter levels, in which weak monsters will be accessible. 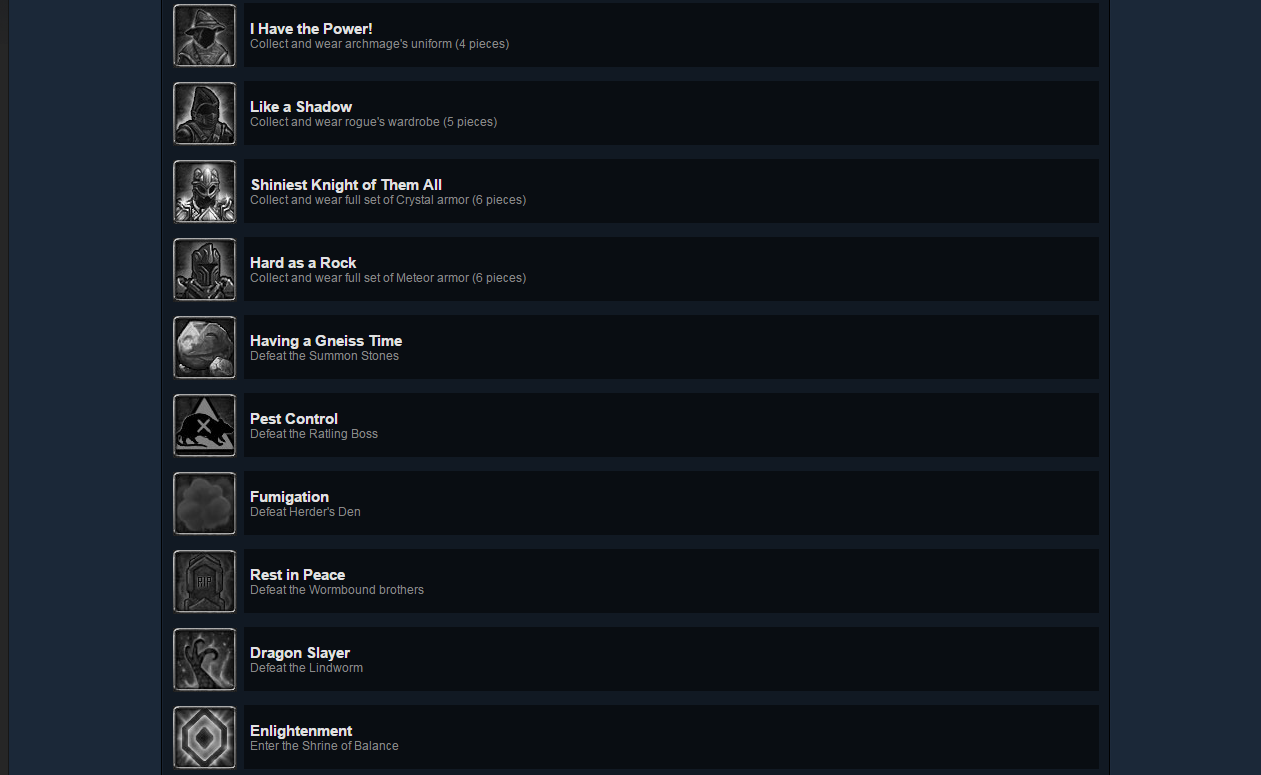 The Legend of Grimrock 2 Steam achievements inform us of the existence of armour sets, as well as of certain enemies, even before the game begins

The stats of character creation, of classes and races, create in-game stereotypical opinions in the player, meta-thinking ones, since if they existed not, and only a flavour description was provided, the player would have to find out in-game what are the characteristics of each professional and especially racial aspect, and then only in a vaguely qualitative way in the case of not overtly apparent statistics. Character creation is, in a nutshell, Player shaping all aspects of the Character, in a lesser or greater degree, depending upon the weight of randomness. Moreover, the compartmentalization of a being in a set of stats is an approach that breaks it down to measurable parts, usually with no interaction among themselves, leading to our apprehension of it as a mechanical set of functions and numbers, as a table and not as a whole being per se. This is not a schizoanalytical (according to Deleuze and Guattari) approach that goes contrary to the illusionary unity of consciousness, striving towards constant transformation through the conjunctive synthesis, since we are not talking about a fluid entity. It’s not even an individuating (according to Jung) approach, but rather, it is pure mechanical rationalism, the attempt of total enumeration of a being’s aspects. 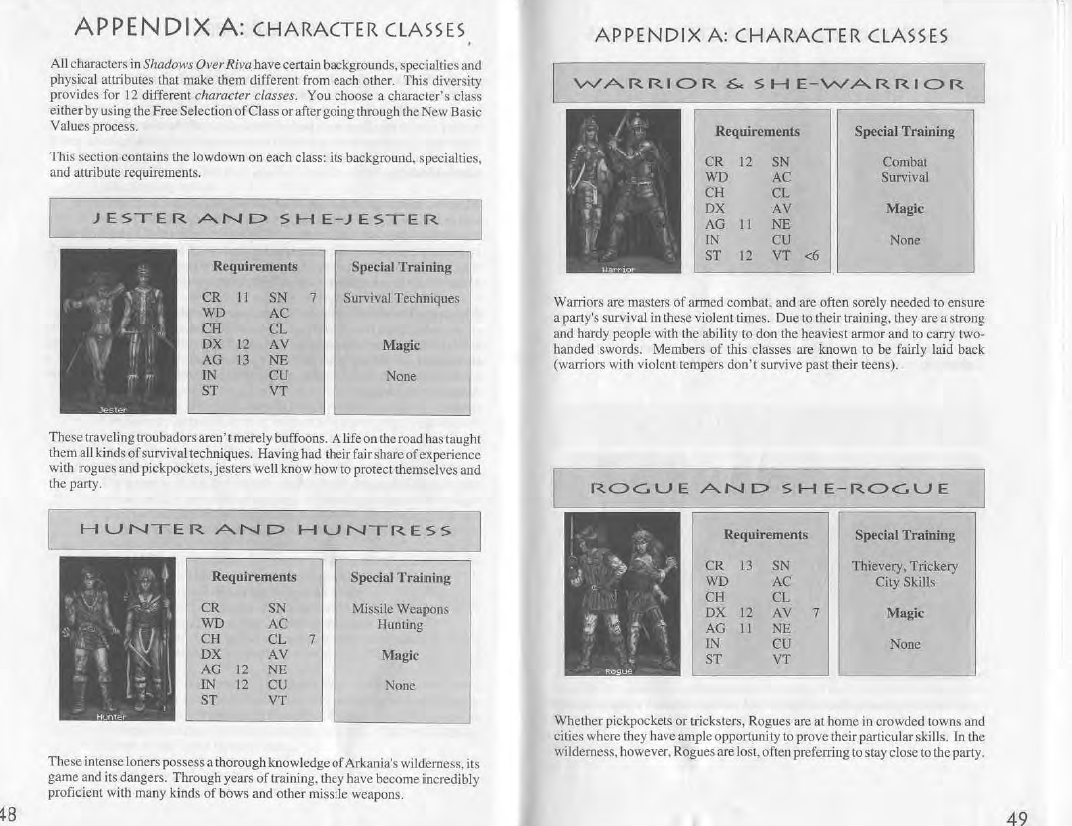 Character Class (races are part of them) description in the manual of Realms of Arkania 3. The stat requirements, as well as the descriptions shape the Player’s image of them, creating stereotypes

Let’s see two typical, indicative stereotypes that are created through race and class descriptions and statistics, both in table-top and virtual sub-genres. Humans are the great adventurers, those that, due to their short life-spans are the most restless spirits, the balanced-out race (or rather the most basic one, variations on which are the other ones), the jacks of all trades one could say, usually being eligible for all sorts of career activities. This anthropocentrism goes back to the first tabletop RPGs, and though it seems logical on a surface level, it conceals some layers of depreciation of the Other or at the very least trying to make up for the supposed advantages of the Other in comparison to the self, by creating irrational privileges (in earlier D&D versions, as well as in several PC-Games directly or indirectly influenced by them, we humans can be whatever class we want, since we are disadvantaged in comparison to the other races). It is an interesting and not so innocent division between “us” and “them”, which has some psychological and social ramifications that are beyond the scope of this text. But as far as the Player’s gaze upon the world is concerned it surely is affected, especially if these stereotypes are reinforced by NPC behaviour. As far as class is concerned, fighters, for example, are usually stat-wise more physique-oriented, less intelligent (thus more easily manipulated than say such mental powerhouses such as wizards) and are even considered the worst party member to be in charge as far as dialogue options are concerned. To cut a long story short, the Player knows vaguely what to expect from certain NPCs’ behaviour due to this meta-knowledge about races and/or classes which is acquired through both previously played games and fantasy genre in general, as well as through something as seemingly innocent as the statistics of the character creation. Even space is not untouched by this, since, for example, a forest settlement of dwarves may be considered something of a paradox by a Player, worthy of closer attention and scrutiny rather than what would be turned towards an elven settlement on the same spot.

In dungeons, and buildings in general, via mapping help, one can hypothetize about the existence of secret rooms, corridors, etc. This is an activity that can be performed by an on-spot person in the real world, so this cannot be said to constitute a meta-gaming action. Meta-gaming is more evident in how the player perceives and thinks about towns, villages, and the whole positioning of points of interest on the world map, the assumptions he makes about them (see the above example of the dwarven forest settlement). A good example concerning the points of interest is the visibility on the map of the quest goal, something of a default feature nowadays in the vast majority of cRPGs. This, as well as the separation of doors-of-interest in a city from decorative ones (namely clickable/interactable from unclickable/uninteractable ones), creates a world in which places fall qualitatively in two categories: utility and décor, a thing not really applicable to a real world, at the very least as far as the totality of highlighting via key pressing is concerned. Moreover, in games implementing level-dependent enemies one can wander wherever he wants without much fear, but in non-level-dependent enemies games, one is bound to be cautious to where he ventures. In the latter type of game, distance usually equals to danger, at least until the end-game. Relative to this, content gating*, both soft and hard, and the acknowledgement of it, shape the Player’s (hence the Character’s also) image of the game-world geography, though neither is a blatant meta-thinking feature if it is cleverly implemented (roads can be closed and ship routes may well be unavailable for transportation to an island).

*Content gating is the demarcation of a game area or areas, and the exclusion of the Character from these areas until some condition is met – a certain Character level, the completion of a quest, etc. In soft gating the area restriction is enforced rather subtly through impossible-difficulty monsters, but the Character can access the area in question, though it usually is fatal to do so. In hard gating the area is completely off-limits, usually navigationally (closed roads, unavailability of ships for naval transportation, etc).

Knowing that a game’s character advancement is skill-based instead of experience-point-based can lead to a pretty different gameplay, either more obsessive and repetitive, non-linear, or more focused on a certain type of activity than others. For example, in Elder Scrolls, up to Oblivion, character advancement was tied to the major and minor character class skills, thus it was obvious that you had to engage in activity that honed these skills. If the Player knew that the Elder Scrolls were experience-point-based instead, then her activity could well be different. The same point can certainly be made in cases of experience-point-based character advancement, if one contrasts games with XP rewards from combat, and those that reward only quest completion and other activities, just like in Pillars of Eternity.

In game worlds where resurrection is possible, taking advantage of this resurrection fact (for instance keep on fighting though it is evident that at least one party member will certainly die) lies in a shadowy border between meta- and normal-thinking. It all boils down to the supposed attitude of the Character’s personality and attitude towards death, dying, and what it is to undergo such an experience (what is known about afterlife, how well established it is, etc), the communal bonds between the party, etc.

Quests that are failed or are unobtainable add to a game’s replayability, but, via meta-thinking, trim the sense of a player’s completion of the game, if the case is that you cannot complete all quests in a single playthrough. What this means is, that from the point of view of an entity inside the world, the possibility of leaving some things to lie undiscovered or uncompleted is absolutely acceptable and realistic (one cannot know the Whole of the world), but from a certain player’s standpoint (namely shifting of point of view from character to player mentality), it is somewhat unfair of the game, to not providing this opportunity. And let’s also be realistic: a second playthrough of a 40-60 hours game is beyond the reach of a respectable portion of the player population, especially if it means seeing just a bunch of different quests.

In cRPGs which implement shopkeepers with a finite amount of money it is customary for the Player to be able to see the remaining amount, something obviously not usually happening in real-world situations. Beyond that, the fact that merchants will gladly accept any quantity of relevant to their trade items, restricted only by their purse (if they have a finite amount of gold), is certainly non-realistic. If one did not have previous knowledge from other games, the looting upon looting of enemy armours and weapons (carrying limits permitting) would probably be considered illogical, since how many of these items would a merchant buy?

Finally, MMORPG instances are among the most extreme meta-thinking examples, for they demand of the Players to repeatedly try the challenges contained therein until they manage, through successive Character deaths and the knowledge they acquire from them, to rise to the ability level of being able to surpass these challenges. And more so, after the challenge completion, the Players are able to return and repeat the same dungeon/instance (hence the instance characterization). In essentia, a kind of reincarnation is implemented in the challenge mechanics, demanding, as a sort of popularized eastern philosophy, the return of the being(s) again and again, until they hone their abilities to such a degree that they are able to break through this mandatory reincarnation cycle and claim the spoils of ordeal.