Phoenix Online Studios is a name more or less known to the contemporary adventure game community. This is to be blamed mainly to Jane Jensen’s involvement with the (quite good, some little problems notwithstanding) “Cognition” series, to last year’s “Moebius” (here you can read my review of it – in Greek), and of course to “Sins of the Fathers” revamped edition. As it turns out, Phoenix Studios are also publishers of a number of smaller developers’ titles, among which are “The Last Door”(developed by The Game Kitchen), and more recently “Morningstar: Descent to Deadrock”(by Red Herring). Morningstar originated in 2009, as a free flash game, a thing discernible in some of the shortcomings of this year’s commercial PC version.

Morningstar is a sci-fi adventure game, taking place on an apparently deserted planet(Deadrock), on which the spaceship(“Morningstar”), part of whose crew you are, just crashed. The ship’s captain is alive (alas impaled by a metal rod), another of your crew-mates is dead, and it’s up to you to save the captain’s life, fix the ship, explore the planet, and if possible escape it. Nothing special story-wise, nothing innovative. An attempt is made of incorporating a measure of hard science in the game’s “lore” and environmental mechanics (aka the ship’s mechanisms and life-support systems), based on sci-fi staple themes (long distance space travel survival approached via hibernation, electromagnetic pulses, etc). That is not to say that Morningstar’s story isn’t engaging – its cliches are quite effective. Moreover, the desolation of the planet, combined with the gloomy facades of the stone heads, creates a sort-of menacing ambience. Unfortunately, the game is too short to build elegantly upon this theme (the flash-game origin is apparent on its duration: 4-5 hours at the most). 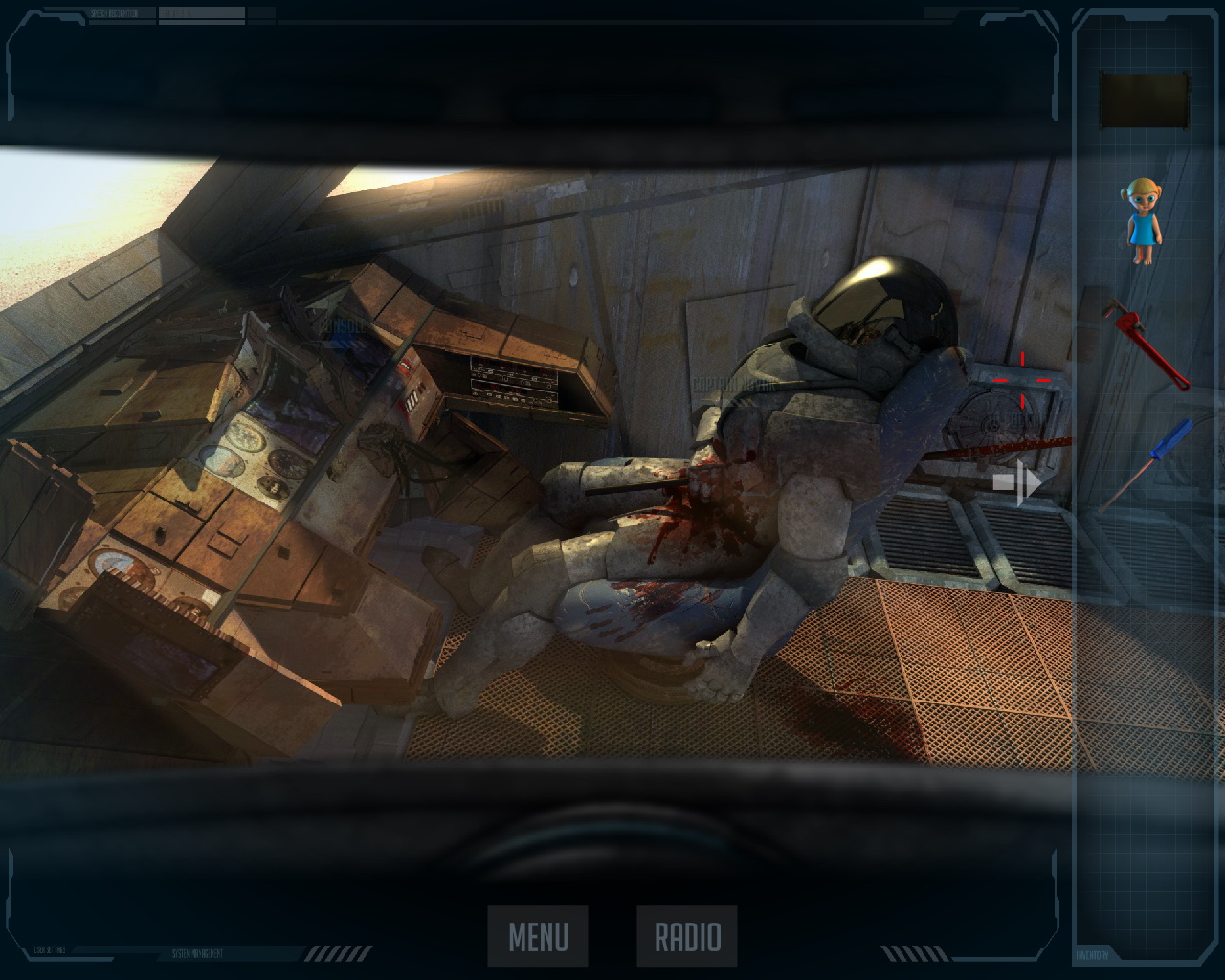 The game is composed of static, pre-rendered scenes (a la Myst) which are in a not-so-weird way reminiscent of hidden object contemporary games. Each of these scenes has a number of hot-spots; once you mouse over a hot-spot, it becomes framed, and it can then be interacted with. This means that a small amount of pixel-hunting is embedded in the game’s mechanics (hence the hidden object game association). The hot-spot can be an exit, or an item (pickable or not). The game action thrives on item discovery, combination, and (a bit of) manipulation. Morningstar’s inventory is limitless, a thing made apparent once you are half an hour or so into the game. The fact is that there are lots and lots of items, a thing that deters the brute-force combiner; more so because in some cases apparently it matters the subject/object item association. Let’s say you have item A and item B; you try using A on B(A acts on B, hence the subject/object analogy) and nothing happens, but then, if you try to use B on A(thus making B the subject) it works. This is for me a dreaded feature in adventure games, but it appears to be inconsistent through Morningstar, so it could be blamed on a bug and not to developers’ choice. As far as the item combination is concerned, its logic is usually sound, especially if the player pays attention to the items’ descriptions. Some things seem to bit a bit stretched (concerning the copper coil) but all in all the good thing is that you do not have to resort to brute force combinations, since most of the time it is easy to work out logical associations.

Riddle-wise now (meaning pure riddles, not item ones), there is essentially just one in the game, towards the ending. On my first contact with one of its parts, I miscalculated its scope as grander than it really is. Still, it is a satisfying mental exercise (basically the only “real” adventuresque one in the game), of medium difficulty. The game’s global difficulty lies on the easy side of the spectrum, taking into account the Radio option; namely a GUI button with which you contact your captain, who gives you some (blatant) insight into what to do next – more than a hint in the majority of occasions. Finally, there is a map in your inventory, which can be quite useful once you are out of the spaceship. 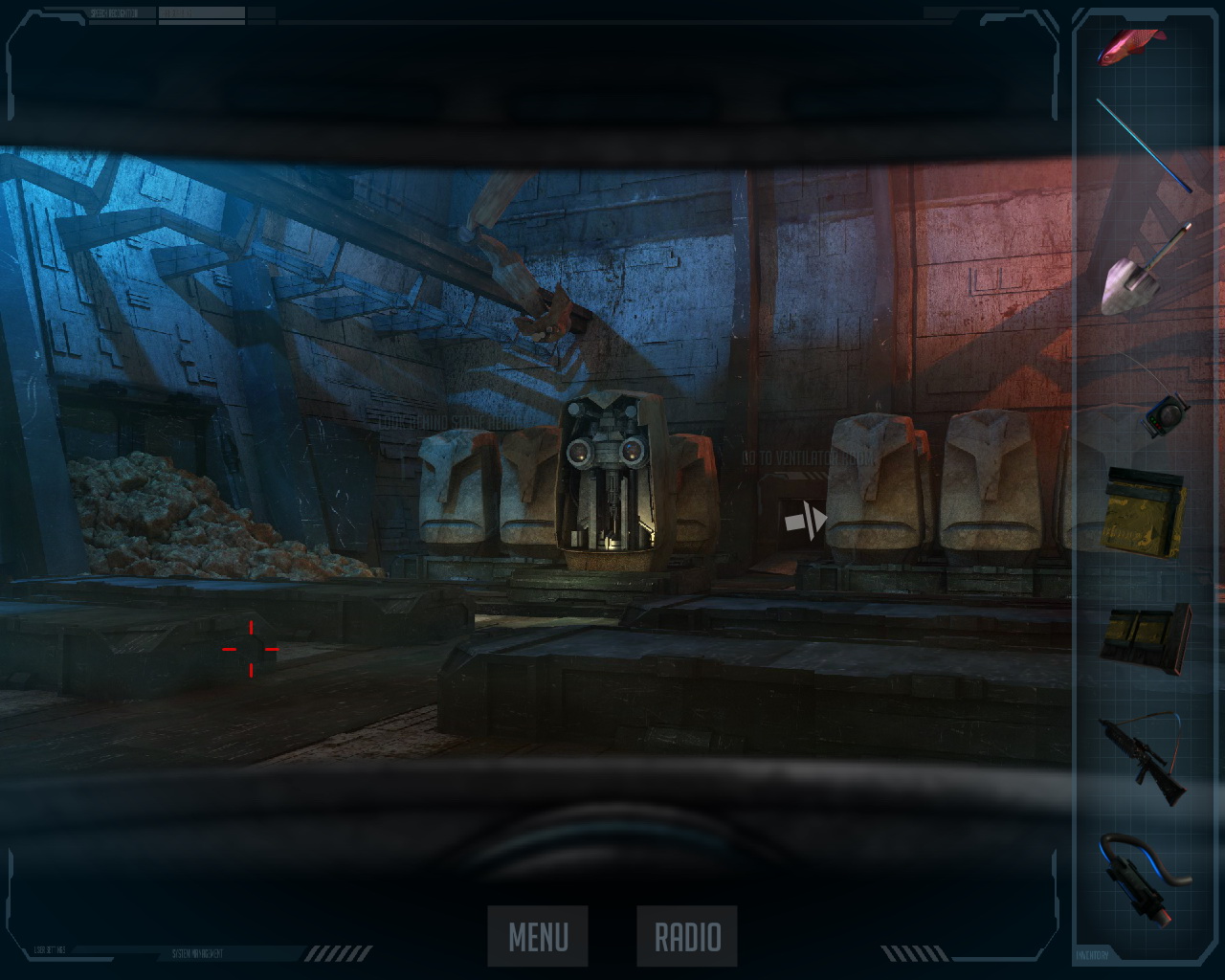 Up until now I have made no mention to characters, though I consider them to be a pillar of adventure gaming. Unfortunately, Morningstar has almost no character interaction per se. Even the ship captain, your crew-mate, is interactable only via cut-scenes and the Radio button, although you can physically approach him. His (living) body is an item and nothing more. As for the remains of the crew of another ship, their memory recordings provide a feeling of background and atmosphere, but in the end the potential of this arc is left mostly untapped. All in all the game follows the Myst-like tradition of nonexistent character interaction, even on an indirect basis – and though in a deeply riddled(sic) game like Myst characters were not of much importance, here, due to the linear progress and anemic challenge of the game, a bunch of NPC (or even the well-developed memory of one) would add to Morningstar’s flavour.

In conclusion, Morningstar is nothing special. It is a game initially developed as a flash freebie and that is apparent to both its one-mindedness (item-centrism) and its very small duration. It manages to build a bit on isolation and “stranded” themes, is slightly menacing, but ends up gainsaying the expectations that it creates, mainly due to its limited, demo-like nature. Still, not a bad way to pass a sci-fi evening.