There are few things more detestable to me than horror that constrains itself to the human factor only, horror of the “human is the greatest monster” kind, horror that dissolves supernatural in the pool of psychological factors. The highest of desecrations: to establish a narrative of paranormal appearances, to let the receiver of the artwork be immersed in it, revel in its weirdness, and then to deconstruct the supernatural part, blaming all to madness or -even worse- to plain human emotion. This viewpoint of mine excludes the ambiguous artwork, the one whose narrative is susceptible to multiple explanations, thus allowing its partaker to adopt the hermeneutic model of his choice. “The Cat Lady” (an adventure game of 2012, among the much discussed about specimens of contemporary horror) belongs to this last category of exceptions. 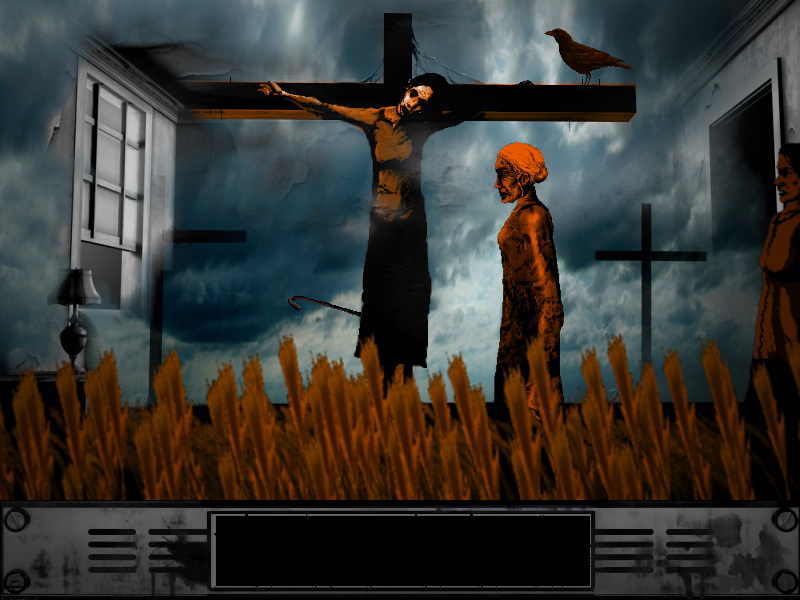 Cat Lady oscillates between the genres of interactive novel and traditional adventure game, leaning mostly towards the novel one. Upon close scrutiny, the game mechanics reveal a 1D(single-dimensional) game (the player moves upon only one axis -the XX’ one-, on which can be found all the interactable entities(characters, items, etc)). Due to this feature, Cat Lady is an easy game. Having just one axis upon which to move inside the game, one can easily comb the available space; a thing quite more difficult in a 2- or 3- dimensional game, since there, one has to take into account not only the axis points, but all the quadrant space as well. Thus are 2 conjectures reached: Pixel hunting is essentially non-existent, and, due to the nature of the game mechanics, the difficulty level cannot rise to an excessively stimulating level, especially that of the riddles. The game tries to overcome these inherent constrains via background drafting, aka imbuing some background screens with clues. Still, the fact remains: if one walks from one level edge to another, one finds all entities necessary for game progression, making the Cat Lady susceptible to brute-force progression techniques. 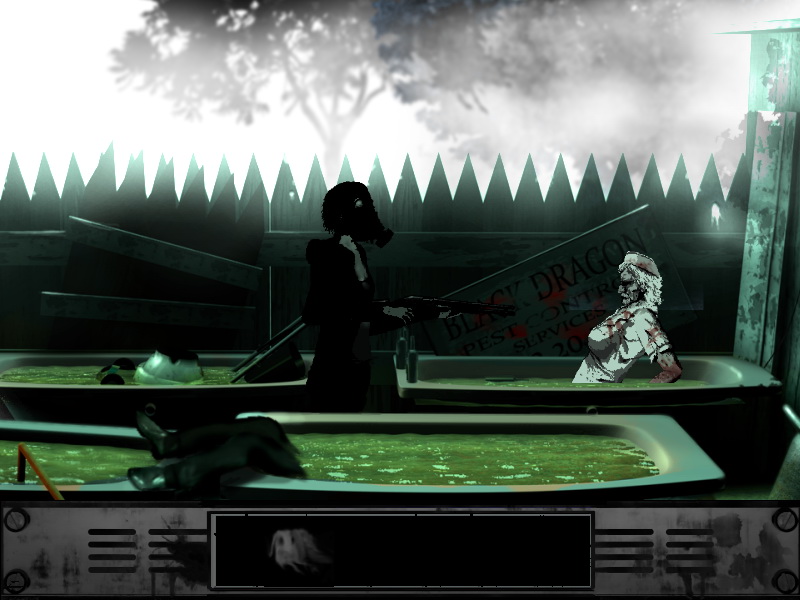 Concerning the story: there is much here for the player to consume, as is reasonable due to the restrictions in the gameplay department. I would say that, roughly more than half of the game comes down to dialogues and cutscenes. This (narrative) part is unarguably the game’s essence, making the Cat Lady a definite member of narration camp, as far as the narratology vs ludology battle is concerned.

On the contents of the story: The main character, Susan Ashworth, attempts suicide. The first playable moments take place in a parallel/dream/postmortem world, in which the player tries to find out what is going on, through a bipolar (grotesque/jubilation) atmosphere. Soon our heroine arrives at the Queen of Maggots’ house, who provides her a second chance, bringing her back to life, though not without some promises in return. Later on, Susan meets the costar lady, a yang personality to the yin of Susan’s.

The whole story revolves around paranoid people and paranoid killers. Susan is the bridge between base (aka plain human) and supernatural (fully sovereign in the surrealistic maelstrom of Lady of Maggots’ grounds). The candle flame of magick and mythology never goes out, unless snuffed by the player’s mind. 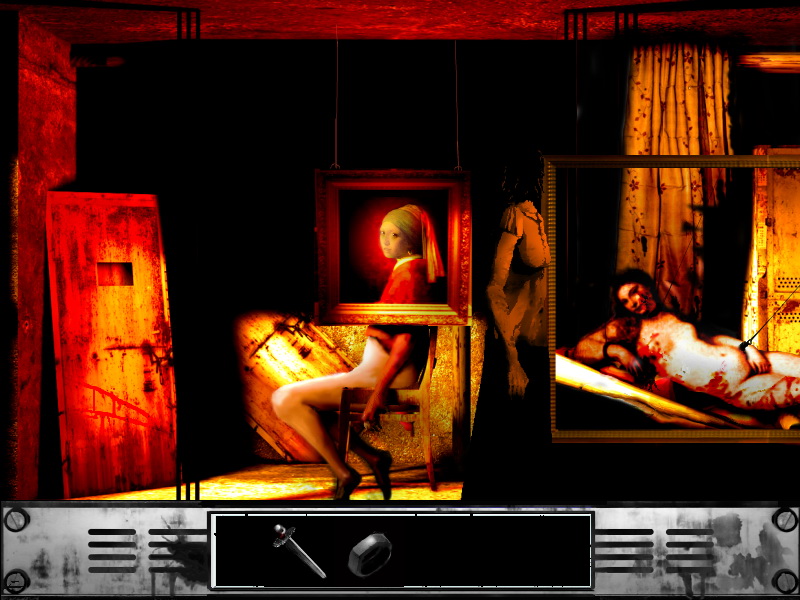 The essence of fear in Cat Lady is mostly introspective, since it deals with everyday terrors, things that may happen to anyone. Decrepitude as the penultimate menace, the loss of sight (the game does not hesitate to take away the player’s eyes – for a little while), Sickness, Tragedy in ancient Greek guise. Graphic-wise, there are ”supernatural-flowing-upon-reality” horror elements using over-exposed backgrounds; an exquisite use of deep shadow upon the environment, implying hidden things; voluminous, crude, vertical background shapes, impersonating decadence. The character models’ movement is clumsy, convulsive, puppet-like. The sound effects are effective, though music (the soundtrack contains “rock” songs) is a bit out of place, as far as pure horror is concerned. 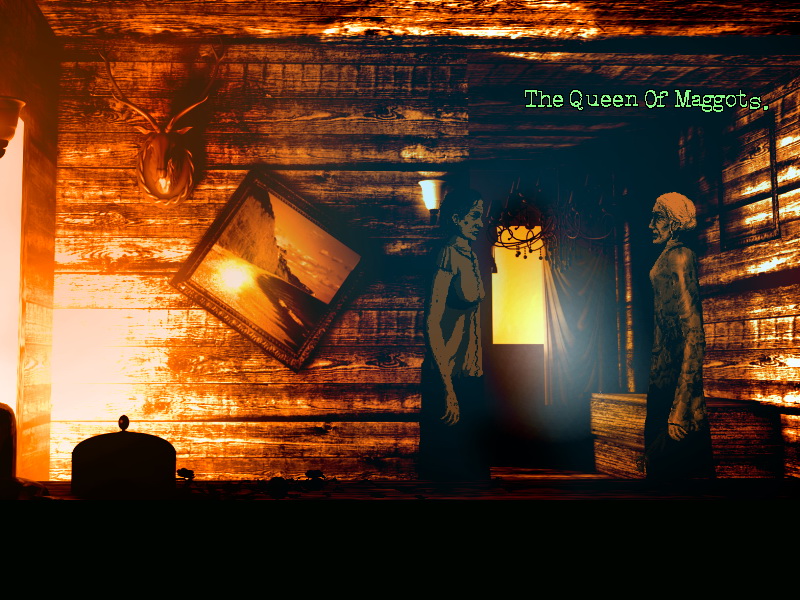 The Cat Lady is a sick creation, quite demanding on the player’s nerves, due to the extremity of a number of scenes, and to its inherent misery. A comparison could be drawn with “Harvester”, the Cat Lady being a mature and more substantial take on the cult classic. The game is an interactive novel, not directed towards hardcore (riddle-crazy) adventurers. It is aiming to people who want to experience a story of utter darkness and horror, which contains a sly critique of networking, terror propaganda, and contemporary social conditions. 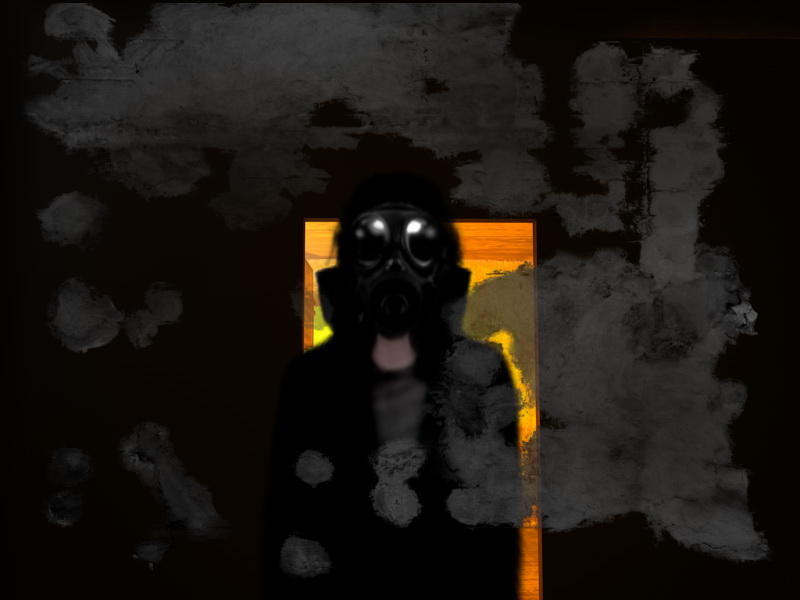