A: A general perspective

The concept of progress is deeply rooted in the RPG genre (pen & paper or otherwise), the most obvious expression of it being the whole leveling structure. A character (or a multitude of them) almost universally sets out (the spatial verb is not ambiguously chosen, for progress is based upon spatiotemporal pillars) as a “low-level” (meaning weak in comparison to most challenges lying ahead) person, who is bound to improve (in an array of personality characteristics – physical, mental, social) as time passes, space is explored, and she indulges in actions that either hone her skills, expand her understanding of the world, help other beings, etc. This improvement is of a practical (as far as the game world is concerned) nature, as will be apparent below. The implication of a forward movement towards this practical betterment of the being is evident.

The notion of Progress is deeply rooted in western thought, as much as is the linear concept of time. Those 2 concepts are irrevocably intertwined in the mental construction of evolution through time, namely the idea that as time progresses, so civilization as a whole evolves, improving in comparison to its past aspects; not necessarily in every single time step it takes, but on a macro temporal level – for example: “civilization (and through it humanity) has improved during the last century, it has moved forward”. It seems that our linguistic mentality has connected the spatial (and subjective) term “forward” with the future (though on a subtler level this is not always the case – see for instance the phrase “winter has moved on”, which refers to a past season as having moved on, implying forwards). Still, it is good to remember that progress is not a humanity-wide idea (the Australian Aborigines for instance have no concept of it).

Returning to role playing games, let’s trace progress inside the mechanics of the genre. As mentioned, leveling is perhaps the single most obvious mechanical structure that is tied to the progress wheel. The whole leveling process is usually depicted in tables, in which a direction is specified as that of progression through the levels (usually from top to bottom, but not always so). Story matters aside (though even there we say that we want to see how the story unfolds or progresses) one of the reasons that we play RPG’s is to improve our character. How is that achieved? It depends on the game system, but in most of them, the experience point gain is central. Experience point: the word experience refers to a past event, experienced by the character, that has in a certain way enriched the character’s being, thus making it more “powerful”. All past experiences that matter (a thing decided both by the rules and by the dungeon master – in the tabletop/pen & paper variety) are enumerated and categorized, each translated to a certain number (or fraction possibly) of points. These are added up, summarized, and the specific nature of the event experienced is lost once turned to points (we do not usually have many categories of XP – for instance social, combat, etc). Thus, knowledge (as experience) is revealed in the game as cumulative and progressive, always adding upon the existing corpus of experience, as it was considered by science before quantum physics (and philosophy) came in to view. Whatever one experiences (apart from certain niche encounters – as are the level-draining undead in D&D for instance) contributes towards this character’s betterment. 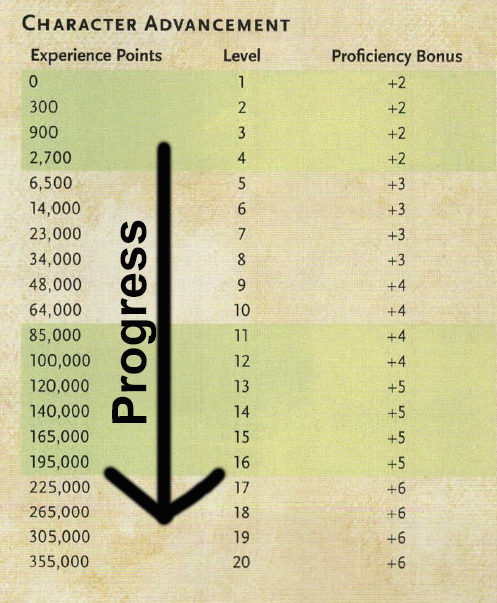 Thus is leveling made possible through the adding up of past experiences, leading to the Level-Up! Moment, the culmination of the effort and time invested (see below), and an improved character. But what is exactly entailed in this improvement? Most, if not all, of the character improvements are of a practical (as far as the game world is concerned) nature. Incoming damage threshold (aka hit points) is increased, more skills are added to the character’s arsenal, some innate powers could appear or be awakened, and inherent stats (corresponding to physical, mental, or other abilities) are improved. The practical nature of the improvements is necessary, in order for the player to fully reap the fruits of his labour. If the improvement was of a theoretical, conceptual or mental nature, then they would simply serve the character and not the player, apart from situations of great identification between the two. To clarify this, how can a player feel, understand, and experience an attribute improvement, for example the rise of his character’s Intelligence by a number of points? Only through indirect means, by application of the new attribute or attribute bonus in situations where it is required to overcome an obstacle, or through the empowerment of a spell, the acquisition of a new one, etc, since direct perception of the improvement is out of the question (the player’s intelligence, if such a thing exists, is obviously not raised by the raise of the character’s one).

Thus, one ends up leveling through the accumulation of experience through a number of encounters experienced by his character, in order to improve the character, so as to be able to see the change in the overcoming of more encounters, which are required to level furthermore; a hamster’s wheel of sorts, that obviously does not take into account the desire of the player to experience a story or a game world. My focus here concerns the leveling mechanics and their progressive nature, which is somehow reflective of the frantic and vain quest for progress that permeates the western thought, at least from the Enlightenment paradigm shift onwards.

Of great importance is the idea underlying the whole aforementioned structure, that one can improve through devoting a quantity of a “currency” towards that improvement, whereas the currency is time, effort of thought, hand-to-eye coordination (in certain cRPG’s). This exchange (one could say investment, though an investment is an exchange nonetheless) is in the core of most RPG’s. Time improves the being. Improving it in a way that is meaningful for (and is subservient to) the situations arising inside the game worlds, governed by the game rules. The progress framework is set by the game itself, and the character follows this (more or less) linear course through it, a course whose end point is occasionally the level-cap.